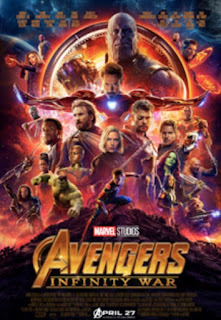 I loved Phase One of the Marvel Universe movies, but have been less impressed with the follow up films. They seem to be getting darker and moving away from the classic Marvel stories that made the first half dozen movies so amazing and so fun. I was hoping Avengers: Infinity War would break that streak.

Avengers: Infinity War is a 2018 superhero, science fiction, action film based on the characters appearing in Marvel Comics. It is rated PG-13 for violence and deaths and is appropriate for tweens and up.


Thor vs. Star Lord. I think the best part of the film was the fight between Thor and Star Lord. It was classic Marvel movie, and I wanted more. It was funny, clever, original, and so unexpected.

Juggling Heroes. This film has a huge cast of characters, and everyone deserves his moment in the spotlight. And this film succeeds marvelously (see what I did there?) in giving everyone a few moments to shine. I was impressed.

Story. With so much action and so many characters, I was concerned this movie would be nothing more than a slug fest, but there is a story, there is a plot, and there is character development.

Surprise Cameo. I'm amazed the producers were able to keep the appearance of a certain character from a previous movie a secret, but they did and I was genuinely surprised by his appearance, as was most of the theater.

Thanos. So often the big bad guy of major movies is little more than a two-dimensional bad guy who is completely evil and just wants to kill and destroy (see Steppenwolf in Justice League for an example). But Thanos was an actual, developed character that showed a lot of development and motive. While he never became likable, he is a credible threat. His motivation is misguided and obviously ridiculous (overpopulation), but there are a lot of people in this world who have proposed the same measures for the same misguided reasons.


Dark and Gritty. One of the things that made the Phase One movies of the Marvel Studios so much fun is their bright colors and humor that made them look like and feel like the classic comics. This movie lacked both. It felt more like the grim and gritty Justice League movie than a Marvel comic. The only humor came from Thor, and there wasn't nearly enough of it.

Video Game Action and Effects. The special effects and movies in the Iron Man movies, Captain America: Winter Solider, Avengers, and others were amazing, well choreographed, and things I hadn't seen before. This movie looks like a video game. The action felt like a video game instead of the beautiful choreographed action of earlier films.

Deaths. There have been rumors and speculation about who would die. I was a little surprised by the deaths, but the way it happened and the ones chosen make me think none of them are going to stick, so I didn't really feel anything for them. I can see most, if not all, being undone easily. This is a comic book movie after all.


I wish this had adapted a classic Marvel story instead of just using the name of one and creating a completely original story. It wasn't bad, but it wasn't amazing either. I also wish the fight scenes had been unique and well choreographed instead of the same ole slug fests we've seen in so many movies.


Avengers: Infinity War feels more like Justice League than the first Avengers film with its dark, grim & gritty feel. The juggling of multiple heroes is very well done, and there is a solid story with real development of Thanos' character. The action is little more than one slug fest followed by another and the special effects look like a video game. There is little humor and few character movements that make Marvel movies so unique and fun (although the Thor vs. Star Lord fight is amazing!). This movie did not have the classic feel of the Phase One films choosing to go a much more traditional route. It was entertaining, but not as good as the first Avengers film. I give this film 4 out of 5 boxes of popcorn.