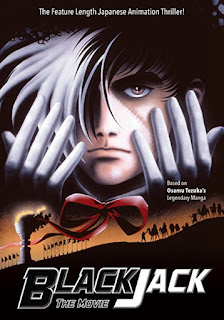 I've been a fan of Osamu Tezuka ever since I read my first Astro Boy comic. And it wasn't long after that when I read my first Black Jack comic and instantly became a fan. Black Jack is an unlicensed surgeon who performs procedures (usually surgeries but not always) that others can't or won't and charges exorbitant fees for his services. He stared in a series of 20-page manga stories beginning in 1973. Half his adventures are medical dramas, and the other half are unrelated adventures.

Black Jack The Movie is an animated Japanese anime that has recently been re-released in the United States on Blu-ray and DVD by DiscoTech Media. It was originally released in 1996 along with a 10-episode series in the same style. Included is the original Japanese track and an English dub. If it were released in theaters today, it would probably receive a PG-13 rating for medical-related gore and is appropriate for teenagers and up.


This film stars Black Jack, an unlicensed medical genius, who is called in my a large corporation to investigate the mystery of the sudden appearance of super humans and their unexplained violent deaths.

Animation. This was animated in the 90s, which (in my opinion) was the height of craftsmanship for Japanese animation. The character designs are edgy, the colors bold, the action exciting. Everything was still mostly done by hand, and it looks like it. Today anime is too clean with too many filters and effects to cover up the poor draftsman skills.

Mystery. This movie is actually a series of mysteries with the solution of one leading into a new mystery that continues until the very last minute of the movie. It kept me at the edge of my seat with the resolution of each mystery being very satisfying. Too many shows nowadays fall into the trap of presenting the major challenge at the begging of the show or season (like Flash or Green Arrow seasons 2+) and bore the audience with failure after failure at solving it for the two hours or the 22 episodes. Black Jack does not fall into that trap.

Pacing. This movie starts with an interesting incident, the Olympics, and continues at a steady pace that never feels too rushed or too slow. This film never lost my attention.

Medical Illustration/Animation. A lot of time and care was put into making the surgical scenes look beautiful and accurate. It really sets this anime apart from others.


Songs. This movie had the most random, dated track that had a completely different mood than the intense action scene it was set against.

Shoe-horned Environmental Message. At the very end, one of the main characters explains the mystery and then out of nowhere suddenly says people are killing the Earth and has this impassioned plea to take drastic steps to save it. This comes out of no where. There is not a single environmental or anti-industry message in the entire movie. Even if you agree with the sentiment, it still feels completely out of place and bizarre. If you want to make such a statement at the end of the movie, have a little foreshadowing beforehand.

Convenient Plot Elements. This movie flows pretty smoothly from one scene to the next with everything working out perfectly to advance to the next scene. There is no real challenge or


I would have enjoyed a little more effort put into the writing. There wasn't a lot of conflict, the obstacles were quickly and easily overcome, and there were a few too many convenient occurrences in the plot to advance the story to the next scene. It wouldn't have taken much to justify why the characters did what they did or decided to try what they did.


Overall, Black Jack The Movie was an exciting, thrilling, mystery that kept me thoroughly entertained and wasn't fully resolved until the very end. It felt more like an American movie with very little evidence of Japanese culture which most people in this country will enjoy. I give it 4 boxes of popcorn out of 5.