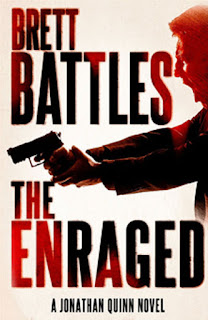 I don't read a lot of spy thriller-type novels, but I do watch a lot of that genre of movies. They tend to work better as movies than books, because it's more interesting to see exotic locals than to read about them, and it's more fun to watch action and fight scenes than read about them.

The Johnathan Quinn series is a series of action, spy thriller, drama, novels and short stories written by Brett Battles. It features a cleaner (someone hired to bury the body after a government or other entity assassination) who finds himself involved in a lot more than he ever signed up for. It's available as eBooks, Audiobooks, and those old-fashioned paper book things.

Writing. The writing is clean, crisp, and precise. Brett Battles could easily write for radio with his uncanny ability to paint such vivid and precise pictures of both settings and action. I can literally see the book as a movie in my mind without even trying.

Exotic Locals. The adventures of Quinn and crew take them all of the world to places I've heard of and some I never have. The author spends sufficient time describing each location in enough detail that you understand the context but not so much that you feel like you're reading a travelogue. He also describes the locations from the point of view of the man on the street and not a travel channel, so you feel like you are there observing the scene in person and not like you're watching it on tv from a helicopter.

Same but Different. There is a definite formula to these books that makes each one immediate feel familiar and comfortable and you aren't surprised at what you're getting. But the stories and characters evolve from book to book enough that each story feels new and different and not like a remake of a previous one.

Understands this is a Novel and Plays to those Strengths. The author understands that these are novels to be read, not a movie to be watched. He understands that we can't see the locals or the action--we have to read it. So he does an excellent job focusing on the parts that work best in prose--discussions between characters, internal monologues, and suspense--and keeps the action to a minimum with vivid descriptions of fights that tend to end quickly.

Audiobook Narration. Most of the novels are read by Scott Brick, who I really enjoy. (The official second novel of the series has someone else reading that does a terrible job, so I haven't bothered to read it. The short stories are not yet available as audiobooks.) He has a very measured, serious tone that works well for this type of story. I know a lot of people don't his style, and if you are looking for a more dramatic style with lots of variation, this isn't it. His voice never changes for different characters so you do have to pay attention to who is speaking. But for this type of story his style works well. I pick up a lot of titles because of his reading and have enjoyed all of them.


Formula = Predictability. Each book in the series follows a very similar formula, which is typical of a lot of series. The problem with the formula in these books is it makes it too easy to predict what is going to happen and when. Suspense, twists, wondering what is going to happen next are all essential elements of the spy thriller genre and the reason people read them. When you follow a strict formula, the reader can easily predict what will happen next and how situations will turn out which is counterproductive to the genre. The author also has a bad habit of regularly killing off major secondary characters at the end of his books, so when the deaths come, they lose a lot of impact because you knew it was coming.


I wish the author would stop killing secondary major killers in such a predictable way. It cheapens their deaths. And I wish he'd mix up the formula a little more so the action wasn't so predictable. There is a lot of suspense, and I enjoy it, but there could be more.


The Johnathan Quinn series is one of the best spy thriller series I've ever read (or watched if we include all formats of entertainment). The books are well written with interesting characters, and the series is constantly evolving to keep the stories fresh but never straying far from the roots of the original novel losing the magic that hooked me from the beginning. I give it a solid 4.5 out of 5 eReaders.