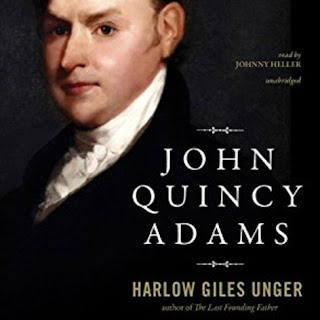 I've studied quite a bit of US History, but one period and one figure that often gets overlooked is John Quincy Adams and his time in government. Aside from the "corrupt bargain" and his relationship to the country's second president, little is said about the numerous other contributions he made. He fought with Washington, served as minister to six countries, served in Congress, as Secretary of State, and as President, and helped negotiate an end to the War of 1812. He argued cases before the Supreme Court and spoke up against slavery when such a thing was prohibited.

John Quincy Adams is a biography written by Harlow Giles Unger. It's available as eBooks, Audiobooks, and those old-fashioned paper book things.


The Writing. Harlow Giles Unger's prose were crisp, clean, and clear. The narrative never dragged, nor did I feel like it moved too quickly. I never found myself bored or wished the book had spent more time on a certain event. I would definitely read more from this author.

Linear Telling. One complaint I have with tellings of true events is how authors like to jump around in time to try and make a point and/or force their interpretation of history on the reader by manipulating the telling and order of events. This book doesn't make that mistake. It tells the story in a linear fashion letting the reader draw his own conclusions for the most part.

Completeness. The novel covers John Quincy Adams life completely. Nothing important is left out or brushed over too quickly.

Objectivity. John Quincy Adams was quite a controversial figure in his day with scandal following him from one post to another. From a floundering law practice to dissatisfaction with his work overseas as minister to various countries to the "corrupt bargain" that won him the presidency, and the "gag rule" in Congress, he was quite a despised character. But many later historians look back at his ideas that were eventually adopted such as the US funding the arts and sciences, the end of slavery, and more and see him as a visionary figure. The author does an excellent job of presenting all points of views and giving amble explanation of why he received such praise and such venomous attacks without forcing his personal opinion on the reader. For a biography, this is important.


Audiobook Narration. I listened to this as an audiobook, and while the reading was proficient, it didn't do the story any favors. It didn't ruin the story, but it didn't add to it either. It was the weakest part.


John Quincy Adams is a well-written book about an intriguing character and his fascinating life and impact on the destiny of this nation. The story is always interesting and never feels rushed or dragging. John Quincy Adams' life is presented thoroughly and objectively without a personal agenda being forced down the reader's throat. I give it a solid 5 out of 5 eReaders.