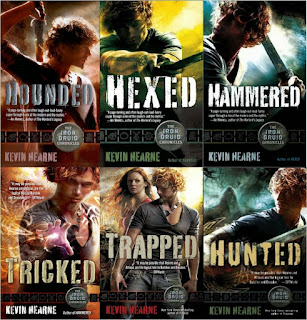 Normally I don't enjoy fantasy. I used to love the world of swords and sorcery, but after a while it all become more of the same with nothing new or original. And the worlds are always so far away with their own elaborate sets of rules that I find it hard to get into the story and care. And most of those types of books are long with numerous volumes that flow from one into another, which is a major commitment of time that rarely pays off. But if the fantasy is mostly rooted in this world with a few mystical elements, then I find it fascinating. The Iron Druid Chronicles is just such a series.

The Iron Druid Chronicles is a series of action, adventure, contemporary fantasy novels and short stories written by Kevin Hearne. It's available as eBooks, Audiobooks, and those old-fashioned paper book things.


Characters. The main characters were all very interesting and well developed. I felt like I understood what made each one tick, and I cared what happened to them. The author gave each of them a full back story with unique quirks that were fun to explore. The "bad guys" were engaging and I felt something when they met their ends. Even the generic creatures like Vampires and WareWolfs and familiar gods like Thor were given unique spins that made each feel fresh and fun. I never felt like I was reading something I'd read before. And somehow the author makes the minor characters who only appear for a single scene interesting and somewhat memorable.

Writing. The writing is very strong. The protagonist is Atticus O’Sullivan (not his real name), the last druid who has lived for thousands of years. The story is told in first person from his point of view. This allows us to explore the world thru his eyes and see it from his unique perspective and comparing the world of today to past civilizations.

Use of Setting. Having lived in Tempe, Arizona for several years, I am a little biased. I really enjoyed the use of actual locations, street names, etc. It brought back a lot of fond memories. But even for those who've never visited the Valley of the Sun, the use of an actual city helped to ground the story and add a nice element of reality and believability to a fantasy story, something that really helps engage the reader.

Adventures. The story was fun and exciting. The first story was a little small in scope, but they become more epic as the saga progresses. The short stories are fun little side trips that add to the overall story while providing a nice break from the epic.

Less Known Mythology. The story is about a druid and the ancient religion of what is today the United Kingdom, a mythology I'm not very familiar with and rarely see in fiction, which was really refreshing. The author spends sufficient time explaining the myths completely enough you understand the story and characters without turning it into a boring lecture.

Use of Mythology/Religion. The author took a very different approach to mythology, legends, and religions by saying they are all true and can interact with each other. This isn't a new idea, (I've seen it in several comic books a few novels), but in this story he made the idea of different pantheons existing in the same universe work much better and much more harmoniously than past efforts. They basically exist based on the faith of their believers (again, an idea that has been done before, but not often and not as well). When characters from other pantheons are introduced

Messing with History. The main character has been around for a couple thousand years, and the author uses this to put a unique retelling of fairly well known events. We're all very familiar with the quest for the Holy Grail, but this version of that story is completely different and yet works and is really fun and exciting.

Audiobook Narration. I listened to most of this series as audiobooks read by Luke Daniels. Luke Daniels is a brilliant reader and the reason I picked up the first book. He does an excellent job of bringing all the characters to life and sounding like different characters without making it silly. I pick up a lot of titles because of his reading.


Heavy-handed bias. I'm fine with authors having strong opinions and expressing them as long as it doesn't become propaganda. This book crossed the line into propaganda with the author presenting his liberal view on the world as superior fact and showing those who disagreed as cartoonish idiots who immediately meet their demise. If you want to be an animal lover, that's fine, but that doesn't make you superior to those who aren't, nor are people who don't care for animals horrible people or ignorant fools. The writing and story were so strong that such obvious propaganda was out of place and annoying.

Overly powerful hero. The author makes the druid and his mythology superior to all other mythologies and characters. This causes a couple of problems. One, it's contrary to the established mythology. And two, the character becomes next to invincible so the stakes aren't that high. I found myself getting kind of bored during the dramatic epic battles, because I knew the druid would win and suffer no real loss. For example, when the main character's ear is cut off, it's healed in the next book, then cut off again, then healed again.


The first few stories took place in Tempe, which was a fascinating setting. Arizona rarely appears in fiction, and when it does, it's never explored. This book actually explored it which added to the story. Then the characters have to move away to an isolated area and suddenly the stories feel like a stage play without scenery. I would have preferred the author to either keep the story in Tempe or find an equally interesting setting to move it to. The stories lost some of the magic when the setting disappeared.


The Iron Druid Chronicles is one of the best fantasy series I've ever read. I don't like fantasy, but I liked this. Each novel and short story added something to the saga and was not superfluous. The world the author created and the unique spin on well known and lesser known mythologies was refreshing and fun. I give it a solid 4 out of 5 eReaders.