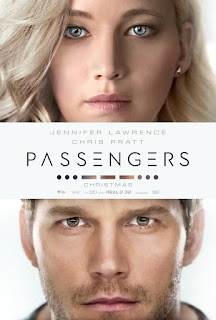 I've really enjoyed Chris Pratt and Jennifer Lawrence in the various Marvel movies they've starred in separately, which is why I wanted to see Passengers. The trailers show great chemistry between two, and it's that chemistry and the natural charm of each that makes this movie so successful.

Passengers is a 2016 adventure, romance, drama, science fiction film. It's rated PG-13 for language, brief nudity, and sensuality and is appropriate for teenagers and up.


Visuals. This was a beautiful film to watch from the backgrounds to the set design to the costumes. Very well designed. I had a lot of fun exploring the world with the main characters and seeing possible technological advances that may come about. And the cinematography was extremely well done showing off the beautiful visuals.

Actors. I wasn't sure if a movie with basically only three characters in a closed environment could really be interesting enough for a two hour movie, but with the right characters, it is very possible. Chris Pratt and Jennifer Lawrence were both perfectly cast. They are both charming and likable on their own, but together have such great chemistry that even the quietest scenes of sitting were entertaining. And while Michael Sheen is supposed to be a mere machine, he is a delight and adds greatly to the story.

Dialogue. The dialogue was well written and well delivered. I could have guessed the characters' history and occupations from what they said and how they said it.

Story. The story was an excellent story and well told. It fully explored all of the ideas that the premise set up without every getting lost in unnecessary diversions.

World. The producers created a really fun world to explore, and the story was set up in such a way that exploring the world made sense. I really like the optimism and brightness of the future. Such a contrast to so many other shows that have come out in the last several decades.


Convenient Plot Twist. I understand the necessity of having a member of the crew wake up to make the saving the ship possible, but that's really the only reason it would happen. In real life, several people would probably have awoken because of malfunctions or maybe another passenger instead of the crewman. And having him die just at the right time was pretty contrived. It wasn't so unbelievable that it spoiled the movie, but it was pretty convenient with little justification.

Action Sequence / Climax. I understand that this is an American film and so there are certain things that have to go into it including a clear and present danger that just barely gets resolved at the end with the fate(s) of the main character(s) hanging in the balance. This really wasn't necessary to the film and was probably the weakest part. Still, they did a really good job of filming it and, while gratuitous, it was entertaining.


I was very satisfied, and didn't feel the movie was missing anything.


Passengers was probably the best flick I've seen in years with solid casting, acting, and storytelling. I was entertained from start to finish and never felt like it dragged or my intelligence was insulted. I give it a solid 4.5 out of 5 boxes of popcorn.