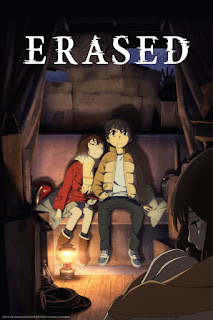 I'm a casual fan of anime. When I first saw it in my youth, I was blown away by the energy and visual feast of the few titles that made it to American shores. Back then it was highly curated so only the really good stuff made it, and American animation was all done on the cheap. Now it seems everything comes over, which means there's a whole lot of bad and mediocre junk covering few gems. But there are still a few gems, and Erased is one of those.

Erased is a 12-episode drama, crime thriller anime from 2016 based on a manga of the same title. It tells the story of a 29-year-old man with the ability to travel back in time to save lives. Usually he only travels back a few seconds, but this time he travels back nearly two decades to his adolescent self to stop a serial killer.


Story. This series has a really solid story, and being only 12 episodes, it focuses strictly on that story with each episode moving towards the resolution with no filler episodes. The pacing is deliberate but never too slow yet never rushed. The characters are developed thoroughly enough that we feel we know them and care about them.

Tension. This series has really good tension with a lot of edge-of-your-seat moments. The mystery

Resolution. The ending was very satisfying. It took a twist the last two episodes I wasn't expecting and didn't think would work, but it did. The animators didn't take the usual route to resolve the story, which was refreshing and appreciated.

The Mother. This main character's mother plays an important supporting role always being there for her son and seemingly able to read his mind. She is very understanding and supportive of what seems like crazy ideas about helping his schoolmates. She doesn't know he's actually his 29-year-old self come back from the future to prevent a series of murders that haven't happened yet, but goes along with it anyway in a logical and believable way.

Unconventional Take on Conventional Story Tropes. This series deals with story elements we've seen a hundred times (time travel, murder, serial killers) but doesn't take the standard approach to any. There is absolutely no attempt to explain how the main character is able to travel thru time or why. The power also works in a very convenient way, at one point giving him a second chance to fix the past almost as if there is someone looking down from above guiding him. The resolution to the mystery was also not the typical ending to this kind of story.


Whodunit. There are a couple of red herrings thrown in at the beginning of the series to make it look like a mystery, but there's really only one character who it could be. Unfortunately, there is no foreshadowing or indications of that, so while you know who it is, it feels awkward when the killer is revealed. It feels kind of like a cheat, like someone is trying to pull the rug out from under you for a big dramatic effect.

Convenient Plot Devices. There are a few convenient plot devices such as the time travel working just right to progress the story in a certain way or people believing and supporting the main character even when it doesn't really make sense to do so. They don't ruin the story, nor are they merely lazy writing, but they could have at least been explained so they didn't feel so convenient.


This series has a very somber tone throughout that rarely changes. Most of the characters seem upset or depressed. Twelve episodes is a long time to sustain this mood. It would have been nice to have had more breaks from it either with humor or fun or something. There is humor and there are jokes, but they are few and far between and very subdued.


Overall, I really enjoyed this series. It had interesting characters, a strong story, and unconventional twists and resolution. I recommend this series to fans of crime thrillers and give it 4 out of 5 remotes.