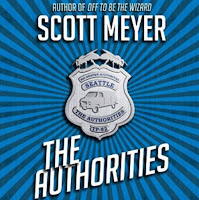 I've read and enjoyed all of Scott Meyer's Magic 2.0 series, so I was curious to see his take on the crime and mystery solving genre and whether it would be as entertaining.

The Authorities is a comedy crime adventure written by Scott Meyer. It's available in all formats: eBooks, Audiobooks, and those paper things your grandparents used to read.


A rich man has assembled a team of specialists to investigate crimes using cutting-edge technology and techniques. A police officer is hired to join the team and draw more attention to the team thru his crazy antics.


Technology. I'm a big fan of gadgets and gizmos. Q is my favorite James Bond character and his gadgets are my favorite parts of the movies. This book contains a lot of cool gadgets and technologies that don't exist in the real work--yet--which makes the story a lot of fun.

Comedy. While none of the jokes are laugh-out-loud funny, the whole tone of the book and content of the conversations is very amusing and definitely entertaining. It's the source of charm for the story.

Main Characters. The four or five characters who appear the most in the story are explored in pretty good depth and have interesting personalities and stories.

Luke Daniels. Luke Daniels is a great narrator and the reason I discovered this book. He does a great job conveying emotion and character with his voice. I was never unsure who was speaking. At times it felt like a whole cast of voice actors had recorded this audiobook.


Mystery. The main story of the novel is solving the murder of a somewhat known psychiatrist. Following the clues and the reveal of the guilty party was pretty mundane.

Minor Characters. Most of the minor characters, including a few members of The Authorities, are pretty two-dimensional and little more than plot devices.


I wish the jokes had been funnier, the characters more memorable, and the mystery more engaging and enthralling. Everything was good, but nothing ever reached the level of great.


The Authorities is a funny book with a mostly interesting cast of characters and an entertaining take on the crime/mystery genres. The jokes are amusing but never reach the level of a guffaw like in the author's previous books. They mystery is interesting enough but certainly not the strongest element. It definitely held my interest, but I'm not sure I'd pick up a sequel if one comes out. I give it 4 out of 5 eReaders.