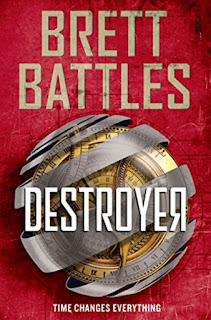 I love time travel stories, but it's rare to find one that isn't just a rehash of a story I've read or watched or heard over a dozen times. Rewinder presented a really fresh take on time travel that really grabbed me, but it seemed complete. So I was curious to see where the author would go after that with two more novels.

Destroyer: Rewinder, Book 2 is science fiction, time travel adventure written by Brett Battles. It's available in all formats: eBooks, Audiobooks, and those paper things your grandparents used to read.


The world where Great Britain won the Revolutionary War has been changed to our reality where America triumphed. Now a new mystery faces the main characters threatening to further change history.


Interesting Mystery. Most of this novel involves a strange man in grey following the main characters, and they have to figure out who he is and why he is following them. The answers and motivation are definitely interesting. If only it had stopped there.


Undermines the Original Novel. The first novel, Rewinder, was a concept story. Instead of taking our reality and changing it to an alternate history, the author did the inverse taking an alternate history and changing it to ours which was really clever and rarely done. The story was finished. There was nothing new to add to the concept. Unfortunately the author decided to add two more books which completely undermine the original concept.

Unlikeable Character. Being a concept stories, the characters are not fully developed, because they aren't the focus. That's fine for first book and half of this book which is a mystery. But then the time jumping begins, and although the reader has figured everything out just past the midpoint, the protagonist is not very bright so the reader has to struggle thru the rest of the novel waiting for him to catch up and figure things out, which he never fully does.


I wish the author hadn't written this book. The first book had such a fresh approach: the original world was the alternate version of our planet that had a change in a major historical event, and when the time travelers went back to study it, they accidentally changed history to create our world, the one we currently live in. The story was finished. There was nothing new to add to the concept, and this book proves it.


Destroyer: Rewinder, Book 2 is a disappointing follow up to an excellent science fiction novel with an almost never used twist on the time travel genre. The story actually undermines all that was accomplished by the first. And the characters were mainly plot devices to advance the ideas of the first, not interesting individuals that the reader cares enough about to want to see further adventures featuring them. I give it 3 out of 5 eReaders.