Book Review - The Path Between the Seas: The Creation of the Panama Canal, 1870-1914 by David McCullough 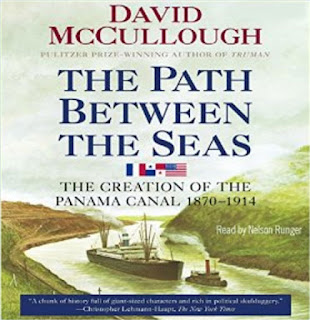 I knew the Panama Canal and been built and it was a boon to shipping because of how much time it saved sailing from ocean to ocean, but other than that I was clueless as to its history or the challenges and sacrifice associated with its construction, nor did I really care. But I love this period of history, so I was curious.


Information. This book is chuck full of information and answered questions I never thought to ask. Every aspect of the construction from the initial idea to the discussions to the financing and planning to the fundraising to the political challenges to the completion was explored thoroughly. I had no idea that it was the largest, most expensive venture undertaken by modern man outside of war.

Complete and Thorough. The author really did his homework. He covered all angles and answered all questions that could be answered given what information is still available. Ancillary events that affected the construction in one way or another were also explored to give the reader a clear view of what was happening in the world at the same time and what effect it had.


Storytelling. This book reads more like a scholarly documentary or a list of facts than a story. Some people may appreciate that, but I found it boring. The author took the identical methodical approach to every last detail making the narrative feel very repetitive. After reading Wright Brothers, I know the author is capable of conveying history in a much more interesting fashion. Considering the subject matter and all the drama and intrigue that went on during the entire process, he certainly had plenty of material to work with.

Pacing. This book is very long and feels very long. I felt like I was in the trench digging the path between the seas.

Treatment. The small, seemingly insignificant details are given the same treatment as the intense drama, unbelievable intrigue, and heart-wrenching sacrifice of human life. This had the effect of downplaying the really important and moving events and exaggerating the importance and role of lesser matters.


I wish the author had written this as more of a thrilling novel than a dry recitation of facts like in a press conference or a question and answer session. The potential was there with all the drama, intrigue, triumph, and tragedy.


As a scholarly account of history, The Path Between the Seas: The Creation of the Panama Canal is excellent in its thoroughness telling you everything that is known or can be deduced about the entire process. As a story, it doesn't work as well downplaying all the drama and intrigue as mere matters of fact. It's a very long book that feels like a very long book. The information is worth 5 eReaders, but the poor conveyance of it forces me to give the book 4 out of 5 eReaders.