Book Review - For We Are Many: Bobiverse, Book 2 by Dennis E. Taylor 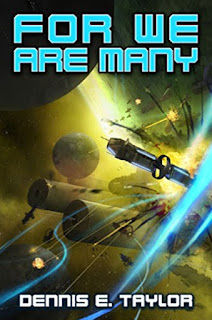 Sequels are an interesting challenge. The author has to balance including the elements readers enjoyed from the first story with something new to justify a second book. Most of the time they don't succeed as well as the reader would like. But sometimes they do.

For We Are Many: Bobiverse, Book 2 is science fiction, philosophical adventure written by Dennis E. Taylor. It's available in all formats: eBooks, Audiobooks, and those paper things your grandparents used to read.


The "Bobs" have found several new worlds capable of sustaining human life and have begun transporting the survivors on Earth to Vulcan and Romulus even though they know they don't have the resources to transport everyone before the Earth become uninhabitable. But new dangers continue to emerge including a Borg-like species determined to strip mine the galaxy and new "Bobs" feeling less and less connection to or responsibility for humanity.


Philosophical Discussions/Dilemmas. While this is a science fiction story and space opera and includes a lot of cool scifi elements, the real story is about the nature of existence, identity, and the interactions of societies. This author does an excellent job of taking a well known scifi idea the readers will quickly be able to understand and be comfortable with and uses it to explore these philosophical and sociological ideas in great detail. Star Trek couldn't do any better.

Comedy. This book is filled with great humor and pop culture references.  For those who are into those, you won't be disappointed.

Ray Porter. Ray Porter may just well be the greatest reader ever. He is able to convey so much emotion without every going overboard or sounding over dramatic. He also reads so well that you feel like he is talking to you and not reading to you. The man can do no wrong.


Character Uniqueness. The "Bobs" are all supposed to be copies of the original, but all of them exhibit unique characteristics and become unique individuals. This presents fascinating philosophical implications. Unfortunately, they aren't unique enough and there are so many of them that they aren't immediately recognizable, so when the author switches to a new "Bob" each chapter, it takes a few pages to realize which one it is, because all the reader has is a name which isn't enough.

No Exposition. This story picks up right where the first novel ended with no exposition or explanation. I had just finished the first book a couple of weeks before, so the characters and action were fresh in my mind, but for anyone who took a measurable amount of time between books, they may find themselves confused.


I wish the characters were a little more unique so that I could more easily follow what was happening. Each chapter shifts to a new "Bob", but it takes several pages to realize who it is and what he was doing because they aren't unique enough to be immediately remembered.


For We Are Many: Bobiverse, Book 2 is a great follow up further exploring the themes and ideas from the first book and continues right where the first book left off with no explanation or catch up, so you need to read the first one to understand what is going on here. It contains the same philosophical discussions and comedic tones readers enjoyed in the first book. The story is advanced while new elements and conflicts are introduced. I give it a solid 4.5 out of 5 eReaders.