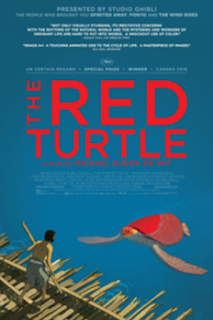 In the 1920s and 30s, animators were very experimental. Animation was so new that rules had yet to be written, so animators were both free to and required to throw everything against the wall and see what stuck. They tried different styles of drawing, different materials, rotoscoping (tracing live actors), imposing animation over photos and live action film, and building and filming models to create three-dimensional backgrounds to name a few. By the 40s most of the experimentation ended with rules and tastes being more firmly established. But sometimes people reach back to those early days and try a few experiments themselves.

The Red Turtle is an 81-minute, 2017 animated film with sound but no actual dialogue. It's rated PG due to peril and a couple of questionable scenes and is appropriate for older kids and up.


A man finds himself floating in the ocean and lands on a deserted island. He tries to build a raft to escape, but a giant, red turtle wrecks his raft. Then the turtle comes ashore and the man is in for a big surprise and a major change.


Animation. The animation is very smooth. It looks like it was rotoscoped, but doesn't feel too realistic like some of the animation for the early 20th Century or the Ralph Baski stuff from the 70s and 80s.

Storytelling. This film is told almost completely with pictures. There is no dialogue aside from "Hey", screams, yells, grunts, and the like. The action is clear, the motivations are clear (for the most part), and the emotion is clear.

Pacing. This movie moves at a quick enough pace that it never feels boring or dragging, and yet each incident is given time to be fully developed and realized.


Student-film Quality. This movie looks from the visual style to the story to the emotion and approach remind me of films in a student film festival. There is a lot of potential and a lot of good ideas and some really interesting attempts and unique approaches, but the finished product just doesn't feel like it has reached a level beyond film school or art school. There is a small sense of peril, but it never reaches the point of most films. There is emotion expressed, but it never really tugs at your heart strings for long. The filmmakers really needed to ratchet everything up a few levels and push the story to more dramatic highs and lows. The tone was very even.

Art Direction. The visual look of this film is very reminiscent of 1920s and 30s animation that wasn't the "rubber hose" look such as the Max Fleischer Superman and Gulliver's Travels cartoons and Bob Clampett's John Carter of Mars proposal. That works, but the backgrounds are a combination of what look like photographs run thru a few Photoshop filters and some CGI that looks and moves like CGI. It doesn't mesh together very coherently.

Lack of Emotion The art style is very simple, especially for the faces which use only two dots for eyes, so there is almost no emotion conveyed that way. All emotion has to be conveyed thru body language, and when the filmmakers do that, they do it brilliantly. They just don't do it often enough.


I wish there had been more of a point to this story. The story was interesting with a lot of variety in action and the ending was unexpected and satisfying, but I wish there had been more to it. It really seemed to have no purpose, and yet life having no purpose doesn't seem to be the message of the film. It felt more like an interesting experiment than a fully-formed and deliberate story.


The Red Turtle is an interesting experiment that is usually reserved for shorts. Somehow the filmmakers managed to make it work for 81 minutes. It is entertaining, will hold your attention, and offers a series of interesting incidents on an island, but never reaches greatness. I give this film 3.5 out of 5 boxes of popcorn.