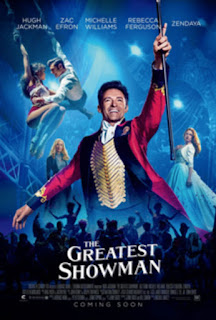 I'm a big Zac Efron fan. I watch a lot of movies just because he's in them. He's a great actor, but he gets such awful roles so most people don't realize it. This movie actually gave him a good part that showcased what he can do.

The Greatest Showman is a 2017 musical loosely adapting the story of P. T. Barnum and his circus. It is rated PG and is appropriate for tweens and up.


Music. The music was really good! The tunes were catchy, and the singing well done.

Dancing. The dance scenes were amazing! They were so well choreographed and performed. What made them amazing wasn't some new, cutting edge style or a massive group of people, but just good, solid, entertaining dancing.

Acting. I rarely comment on the acting, because in most movies its proficient but nothing special. In this movie there were some very good performances that took really chops to pull off. I was impressed.


Sections Between the Singing and Dancing. Unfortunately, this movie wasn't all singing and dancing, and those parts that weren't were slow and boring. I wasn't sure I would be able to sit thru the whole movie when one of them appeared.

Heavy Handedness. This movie lends itself to a message about tolerance and accepting those who are different. I think the story was sufficient to make the point without some blatant, preachy speeches interrupting the flow of the story. They hurt the movie, and the point was made without them.


I wish the sections without singing and dancing had been more interesting an better paced.


The Greatest Showman is a fun, entertaining film filled with catchy music and amazing dance numbers that actually tell the story and advance the plot while developing the themes. Unfortunately, in between the singing and dancing are very slow, boring segments. I give this film 4 out of 5 boxes of popcorn.