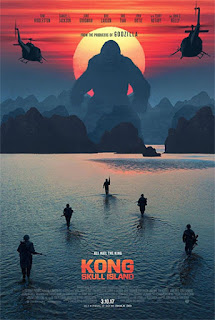 I'm a big fan of what I call "forces of nature monsters" such as King Kong, Godzilla, or mythological creatures. There's something about the sheer power and force of such a being that fascinates me.

Kong: Skull Island is a 2017 science fiction action drama. It is rated PG-13 for language and violence but is appropriate for teens and up.


What if King Kong had been discovered during the Vietnam War instead of the 1930s because of sightings from World War II?


Concept. This is a cool way to reimagine King Kong. It was true to the original movie while being very different and entertaining. This doesn't always work so well.

Ending. I was really pleased with the way the movie ended. It tied everything together nicely and was a bit of a surprise, because I wasn't sure if the filmmakers were going to allow such a happy scene.

Action. The action was really exciting, varied, and well choreographed and rendered. It was a fun watch.

Story. This film had a really good story and explored so many different ways people could react to such a discovery from excitement to fear. While there were a lot of characters, the filmmakers gave each enough screen time to tell their story and express their particular view.


Main Menace. Most of the monsters were rendered well, but the big threat of the movie looked like a bad video game and could have had a more interesting design.


I really have nothing. The filmmakers covered everything well.


Kong: Skull Island is an enjoyable action movie that actually tells a pretty good story and explores several different ways people would handle the discovery of something like King Kong. The whole approach setting it in the 1970s worked really well. And the ending made me smile. The main menace of the movie was kind of a cheesy, b-movie monster from the 50s, but otherwise the movie was well crafted. I give this film 4 boxes of popcorn out of 5.