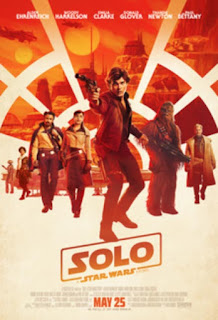 I'm a big Star Wars fan, but I haven't really enjoyed any of the post-Lucas films. They all feel like fan films trying to redo the things the filmmakers love about Star Wars instead of trying to add something new to the mythos that makes feels like it belongs.

Solo: A Star Wars Story is a 2018 science fiction, action, adventure film based on characters created by George Lucas. It is rated PG-13 for violence and deaths but is appropriate for all ages.


Adventure. This was a great, fun, exciting adventure. This is the kind of story I would love to see more of in the comics and TV series. The films hint at previous adventures the characters we all love had, but we never get to see them. Until now.

Story. This film has a solid story. It moves at a great pace, its exciting, it makes sense, and it keeps the audience entertained.


L3-37. I'm not sure the purpose of this droid. It sounded like an angry gay protestor shouting for equal rights. I'm not sure if the filmmakers were trying to make fun of such characters or thought they had added a serious portrayal, because it was so annoying, pathetic, and unlikable I actually cheered when it was destroyed.

Doesn't Add Anything. Like all the post-Lucas films, this feels like a fan film that recycles a lot of the previous movies. Nothing new was added to the mythos. If this movie had never been made, the Star Wars Universe wouldn't be any poorer.

Too Many References to Previous Films. There were so many swipes from previous films that the movie felt more like a swipe than an homage.


I wish this movie had added something to the mythos. I also hope they make a sequel exploring more of the universe and the characters introduced, especially Han and Qi'ra's relationship.


Solo: A Star Wars Story is a fun adventure film that is entertaining from start to finish. This is the kind of adventure I always hope to see when I watch a Star Wars TV show or read a Star Wars comic book. The Lucas films hint at other adventures the characters we all love had, but we never get to see them. This film finally shows one of them. It's little more than a well-made fan film that takes too many swipes from previous films to add to the Star Wars mythos. But as an entertaining adventure, it excels. The story is solid with no real surprises. I give this film 4 out of 5 boxes of popcorn.