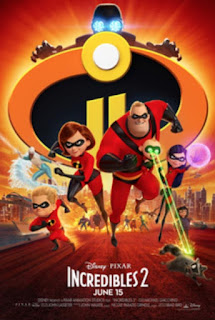 I am not a fan of Pixar films. They've made a few good ones (Cars, Cars 2, Monster's University, and Ratatouille), but most of them feel like they came from the same cookie cutter or were just well done derivatives of other films and genres. The first Incredibles movie felt like this: a fan fiction version of the Fantastic Four.

Incredibles 2 is a 2018 cgi, science fiction, superhero adventure film from Pixar. It is rated PG for violence, killings, and inappropriate language and is appropriate for older children and up.


Not Derivative. Most superhero films feel like a fan fiction version of some previous film, a parody, or homage. This film was fresh and original. It was its own thing. If I were describing it to a friend, I can't think of another superhero film that I could compare it to.

Dark and Serious. This movie has a much more serious and dark tone. I see you murder on the screen, death, much stronger violence than previous film, and inappropriate language. This helped to set this film apart from the first and made it more exciting to watch.

Characterization. The main characters all had a lot of development and felt very fleshed out.

Action & Pacing. This movie had a lot of well constructed action and was excellently paced. It never dragged or seemed to move too quickly.


Dark and Serious. I know I said this was a strength, and it was, but it's also a real departure for Pizar away form the all-ages appropriate family film. I think this has to happen to keep the movies from getting stale, but it could also mean the magical era is over and future films won't have the appeal as older films. Only time will tell.

Supporting Characters. While the main characters were really interesting and well fleshed out, the supporting characters were little more than one-dimensional plot devices. I think the filmmakers could have developed them a little bit more.

Surprise Twist wasn't a Surprise. I'm not sure if the filmmakers meant the reveal of the real villain and their motives to be a surprise for anyone over 8, but it was hinted at so strongly from the beginning that I was waiting for it to happen. It wasn't a surprise, and so the shocking reveal was blah.


I wish the villain had been stronger. It wasn't a bad villain, but it wasn't much of a challenge and the least interesting conflict of the movie.


Incredibles 2 was much better than I thought it would be. It was its own, unique creature and not a cheap rip off, parody, or homage to an early superhero film. It was also very different from the first while still retaining all the qualities of the first that made it so endearing. The villain was the weakest conflict of the film and could have been more interesting. The pacing, action, and animation were all very well done and held my attention from start to finish. I give this film a solid 4.5 out of 5 boxes of popcorn.