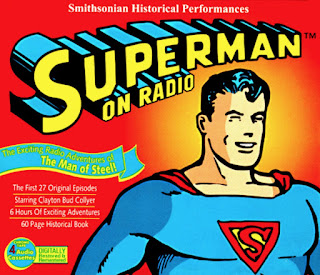 I've been a fan of Superman for as long as I can remember. Some incarnations of the character and his adventures work better than others.

Superman on Radio collects the first 27 episodes of The Adventures of Superman radio show first broadcast in 1940. It's available on Cassette, CDs, and Digital Downloads both paid and free.

Lois Lane. Most portrayals of Lois Lane either make her a sappy, love struck accessory whose only contribution is getting into trouble so Superman has someone to save, or a feminazi who is such an obnoxious, irritating witch the viewer has no idea why Superman has any interest in her. This version of Lois Lane is strong while still being feminine. She is capable but not overbearing. She is a perfect match for Superman and someone listeners are rooting for.

Realistic Adventures. The first episode begins on Krypton, but beginning with the second, the adventures deal with problems that were a concern in that world--sabotage, kidnapping, extortion, etc.


The Final Story. The final story goes into juvenile silliness. It involves an atomic beam machine, some nonsense sci-fi MacGuffin. It's a shame the producers changed tracks from the exciting, real-world problems to this silly work of fiction. The sense of danger and peril that made these shows so exciting was lost.


The first 21 episodes are sheer perfection.


Superman on Radio is a wonderful collection of some of the best Superman stories ever told. The voice acting is excellent, the adventures deal with serious real-world dangers, and the villains are interesting characters that actually pose a threat. The portrayal of Clark, Lois, Perry White, and Superman are all spot on and as interesting as any version. The only downside is the last story that moves into silly sci-fi gimmicks. Otherwise this is pure perfection and entertainment. I give it 4.5 out of 5 microphones.