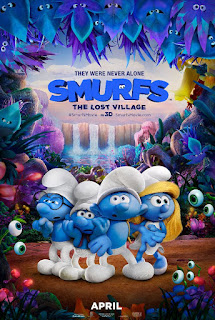 I've been a fan of The Smurfs for as long as I can remember. I loved reading books of their adventures and watching the classic Hanna-Barbera cartoon in the 80s. I was very disappointed by their first movie, The Smurfs and The Magic Flute, and was equally disappointed by the next two movies that were live action and cgi hybrids. When I heard the latest film was more true to the comics and cartoons, I became very excited.

Smurfs: The Lost Village is a 2017 fantasy, cgi, family movie based on the classic comic by Peyo. It is rated PG and is appropriate for tall ages.


Animation. The animation was beautiful. The characters all looked like they should, the scenery was gorgeous to look at, and the movements were all perfect.

Story. The story was strong, well paced, had lots of good action, comedy, drama, and emotion, and was very linear and focused.

Focus on a Few Characters. This movie included many of the Smurfs, but wisely chose to focus on only a handful so they could be fleshed out and the story remained solid and focused.

Brainy's Smartphone Bug. The inclusion of Brainy's bug that can take dictations, take pictures, print, and more was really clever, fun, appropriate, and made this show feel very contemporary.


Voice Acting. I just do not like most of the voices Sony chose for the characters, especially Papa Smurf and Gargamel. Granted, I am very bias towards the Hanna-Barbera voices, but the voices in this film aren't just different--they just don't fit.

Female Smurfs. A lot of people don't understand what a strong woman is. They confuse that with witch (but with a "b") and think it's the same thing. But it's not. The female Smurfs were portrayed a lot more witchy than they needed to, and then they became weak flower children. They were unlikeable.

Gargamel's Incompetence. In the comic and cartoon, Gargamel is actually pretty competent and a real threat. He loses more because of the Smurfs' virtue, their teamwork, and his own bad luck. In this film, he was such an idiot that I had a hard time taking his threat seriously, and when he does manage to capture the Smurfs, it is so out of character and you know he's going to blow it quickly.


I wish this film had been a little more clever for the adults. It was a cute, fun, entertaining cartoon, but it really only had stuff for kids and those nostalgic for the classic Smurfs, which I enjoyed and was glad about, but there may not be more films like this because it didn't get better ratings and wasn't more popular.


Smurfs: The Lost Village is a fun family flick that reminds me of the classic Hanna-Barbera cartoons and the comics by Peyo. It has a solid story that focuses on a handful of characters, is beautifully animated, and has fun adventures and a clever smartphone bug gimmick. I give this film 4 out of 5 boxes of popcorn.