Movie Review - Ant-Man and the Wasp 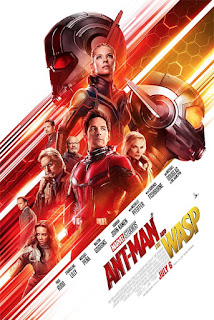 When the first Marvel movies debuted (Spider-man, Fantastic Four, Iron Man, Captain America) I love them and couldn't wait to see the next one. Then after Captain America: Winter Soldier, the movies took a very dark turn and the fun, humorous movies that looked like comic books come to life was gone as was my enjoyment and excitement for the films.

Ant-Man and the Wasp is a 2018 science fiction superhero movie based on Marvel Comics characters. It is rated PG-13 for mild violence and language and is appropriate for most audiences.


Fun. It's so refreshing to watch a movie that feels like a comic book come to life. It was fun, it was funny, it was exciting, there were great scenes of superhero powers, and the story was solid and stood on its own instead of being a small piece of a much larger story. This film is everything we love about Marvel movies and have been missing for the last several years.

Use of Powers. Unlike most recent Marvel films, this movie actually shows the characters using their powers, and all their powers, throughout the movie in a variety of ways so the audience never got sick of it.

Humor. It's been a long time since I've laughed this much as a Marvel movie. There were so many jokes, and they were all so funny and not clichéd.

Action. The action is awesome! And the best part is how unique it was to the characters' powers. The first movie (and most Marvel movies) have very generic action and fight scenes that would work for any character. But these action scenes could only happen for these characters.

Credits. The credits were very clever. The filmmakers staged several scenes from the movie using action figures, which is very appropriate for these characters.


Villains. The villains were boring and weak. Neither was interesting. The filmmakers tried to give the main villain a tragic backstory to make her more sympathetic, but she was too unlikable so we didn't care.


I wish the villains had been likable instead of blah because the filmmakers were afraid to make them very villainous.


Ant-Man and the Wasp is everything we love about Marvel movies and have been missing for the last several years: it's fun, funny, action-packed, has awesome scenes of characters using their powers, has a complete story, and looks like a comic book come to life. This is a return to the Marvel movies that were so exciting and entertaining (like Iron Man, Captain America, Avengers, Spider-man) instead of the dark turn the films have taken where each one is little more than a depressing chapter in a long, overly drawn-out story. I give this film a solid 4.5 out of 5 boxes of popcorn.