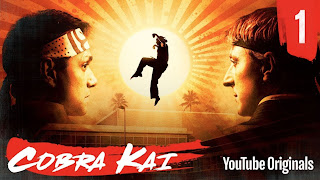 I loved the original The Karate Kid movie, so I was both excited and horrified at the idea of a continuation. Excited because I wanted more Karate Kid action, horrified because of how poorly the remakes of it and other 80s properties had been handled.

Cobra Kai Season 1 is an 10-episode 2018 YouTube Originals series based on The Karate Kid film and continuing the story three decades later. It is rated TV-14 for language and is appropriate for tweens and up.


Story. This series has such a great story. It is perfectly paced and focuses on each character letting their story be told and their character be developed.
Action. While there's not enough martial arts action, when there is karate, it is pretty exciting and a lot of fun.


Romantic Development. Most of the movie is developed just right, but the relationship between Johnny's student and Daniel's daughter is rushed a little too much. A couple more episodes would have fixed that. 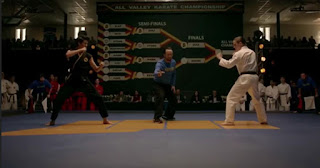 
Cobra Kai Season 1 is one of the best shows I've ever seen. It continues the story of The Karate Kid in a perfectly logical, relevant way being true to the original but brining in so many new elements that all fit. The pacing is perfect with each character given the appropriate amount of time to see his or her story progress and interact with the others. There is a lot of drama, conflict, and misunderstanding along with great action, comedy, and romance. And the subtext of the difference between 80s culture and 2018 culture and how far society has regressed in three decades is brilliant! I highly recommend this show and give it 5 out of 5 remotes.