Book Review: Star Wars - From a Certain Point of View 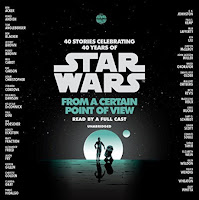 I'm a huge Star Wars fan and a huge short story anthology fan, so I thought this book would be a masterpiece. I first heard about it at Salt Lake Comic-con when several of the authors sat on various panels promoted it. I couldn't wait to read it.

From a Certain Point of View is an anthology of short stories taking place in the Star Wars Universe around the events of Star Wars Episode IV: A New Hope, and is appropriate for all ages and all audiences.


Everything Else. After you get off the shuttle an on to Tatooine, the story takes a sharp left turn. The characters they pick are so obscure, which would be fine if they had interesting stories to tell, but most of them aren't. They range from trite to strange to self-indulgent.

Characterization of Beloved Characters. I didn't appreciate the changes made to popular characters, especially Yoda. He was never portrayed as a whiney old man in the movies. I'm sure he had low points in his life, but I doubt this was how he handled it. Also the weird trip Obi-Wan goes on at his death is very inconsistent with how the force has been portrayed.


Anthologies are always a mixed bag with some good, some bad, and a little great. I just wish one hadn't skewed so far towards bad.


From a Certain Point of View tells stories surround the events in Star Wars Episode IV: A New Hope. It starts off strong with a few great tales, but quickly lapses into mediocre science fiction and uninteresting characterization. I give this book 3 out of 5 eReaders.