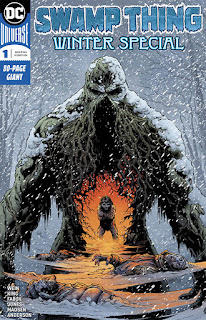 I'm a huge fan and reader of comic books, and while I was aware of Swamp Thing, I never read a single story about him until very recently when I noticed Kelly Jones, one of the most stylish and unique comic artists alive, took over the art duties on his title. He was a much more interesting character than I would have guessed.

Swamp Thing Winter Special is an anthology containing two new Swamp Thing stories, the second by legendary Len Wein and Kelly Jones, and Jason Fabok, and is appropriate for all ages and all audiences.


Art. The art is gorgeous. The first story is drawn by master draftsman Jason Fabok and is a visual feast. Some people think "it looks like a photograph" is a high compliment to pay, but a much better compliment is "a photograph could never look THAT good" and Jason Fabok delivers this page after page. The second story is drawn by legendary Kelly Jones and is as moody and unique as you would expect.

Storytelling. Both tales are expertly told with strong narrative skill. Not only do you understand clearly what is going on, but you feel like you are there and are part of the story, which is what the best fiction does.


First Story. While the first story was masterfully told, it was a strange story with little point or reason to exist. Maybe I just didn't understand it, but more likely it was, to quote Shakespeare, "fully of sound and furry, signifying nothing".


I wish the first story had more of a point to it. Otherwise this issue was a complete masterpiece.


Swamp Thing Winter Special is a masterfully crafted comic book filled with two beautifully illustrated stories well told. The first story, while well told, was a strange tale with little point or reason to exist. I give this book a solid 4.5 out of 5 eReaders.