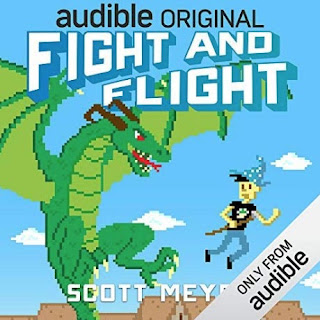 I've been reading this series since it debuted and have enjoyed every installment. Somehow the author has found a way to bring something new to the saga without changing the basic premise or any of the things that make the stories so much fun. When I reached the fourth book, I read a lot of negative reviews about this story, so I hesitated to pick it up. Would it be an epic fail like so many readers had reported?

Fight and Flight, Magic 2.0 Book 4 by Scott Meyer is a satirical, comedic, science fiction fantasy. It is available as an eBook, Audiobook, and those paper things your grandparents used to read.


Premise & Execution. The author has a really clever premise--there is a text file that dictates the makeup of the universe, and altering that file alters reality. People that find the file end up going back to Camelot and pretending to be wizards. The author has also done a masterful job of executing the premise. It's fun, it's clever, it's enjoyable. And four books later, the author hasn't spoiled the stories nor repeated himself.

Characters. The characters are so enjoyable and so likable. They are well developed and while they grow and learn things, they stay basically the same so the stories never drift from what we like.

Narration. The narrator does a brilliant job giving each character a unique voice and reading the stories in the appropriate tone of voice. He's as responsible for the success of the series as the author.

Content. This story was as long as others, but very little happened. The story is about dragons. I think the author could have spent a little more time thinking up cool thinks to do with them.


I wish more had happened.


Fight and Flight, Magic 2.0 Book 4 by Scott Meyer continues a fun, clever series with lots of pop culture references and video game like adventures. The author has managed to once again bring something new to the saga without changing the basic premise or any of the things that make the stories so much fun, something. The story does not feel like a remake or version of any of the previous stories while still retaining everything about them that made them so much fun. This one didn't have quite as much story or adventure as previous stories. I give this book 4 out of 5 eReaders.