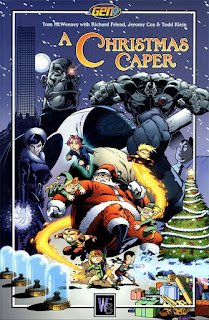 Back in college I saw a small ad in the back of a WildStorm comic where writer and artist Tom McWeeney described the wonder and magic of Christmas specials (like Santa Claus is Coming to Town, How the Grinch Stole Christmas, and other) growing up before the days of home video and cable television. They were only shown once a year so you had to check the TV Guide carefully and plan accordingly, or you would miss it and have to wait a whole other year. It reminded me of

Gen 13: A Christmas Caper by Tom McWeeney, Richard Friend, Jeromy Cox, and Todd Klein is a full-color 48-page Prestige Format comic book. It is available in print. I don't know why this isn't available digitally. It's a CLASSIC!!


Concept. The concept is Gen13 as small children used to lure Santa Claus to a black-ops base to punish him for the coal he delivered to a certain Director of IO. The purpose of the comic was to capture the magic of the classic Christmas specials from the 60s, 70s, and 80s. The writer/artist said he wanted to create something that would be classic, that readers would pull out and read every year, because it just wouldn't be Christmas without it. He succeeded. This book perfectly captures the feeling of those Christmas Classics.

Art. The art is beautiful. It looks very modern while incorporating elements of classic children's storybooks.

Writing. The writing is part classic poetry and part modern prose. There's humor, angst, fear, cheerfulness, romance, danger, and excitement. Even after nearly 20 years, it's still as fun and enjoyable as ever.


Gen 13: A Christmas Caper by Tom McWeeney, Richard Friend, Jeromy Cox, and Todd Klein is Christmas classic I pull out and read every year. It just wouldn't be Christmas without it. The writing, the art, and the overall presentation is as good as it gets. This is a true classic. I give this book 5 out of 5 eReaders.