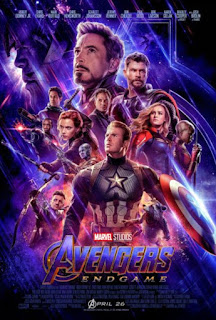 Avengers: Infinity War was such a letdown, that I wasn't all that excited to see Endgame. But I've followed this story this far, I might as well see how it ends.

Avengers: Endgame is a 2019 live action science fiction superhero film. It is rated PG-13 for language  and is appropriate for most ages.


Smaller/More Personal. Infinity War was this big fight scene involving dozens of characters that all had to do something. This movie focused on the core group and how they deal with events. It was much more emotional and personal and much better story.

Story. This movie had much more story than the last. Having a smaller cast helped.

Cameos / Tie-in's to Previous Films. This movie did a great job incorporating the characters and even earlier films into this one. It all felt like it was planned from the beginning and all came together.

Appropriate Resolution. I was really concerned with how the filmmakers would resolve such a sweeping story and do it justice without taking any shortcuts or doing anything contrived. Somehow they managed to honor everything that had come before and not cheapen any of it.


No End Credit Scenes. I was really excited waiting for the mother of all end credit scenes. Nothing. Absolutely nothing.


I wish there had been a couple of amazing end credit scenes. I wish they had come up with something else for Captain America.


Avengers: Endgame is a fitting ending to a 10-year series. The move was much smaller and more personal focusing on the core characters instead of a universe of dozens engaged in an epic fight. The conflicts and struggles were more personal and emotional making for a much more dramatic and satisfying story. Cameos and tie-ins to previous films were plentiful and well handled. All of the stories and journeys from the past ten years were nicely resolved with nothing feeling cheated or betrayed. The only disappointments are the lack of end credit scenes and how they tied up Captain America's story. I give this film 4.5 out of 5 Boxes of Popcorn.