Book Review: Agent to the Stars by John Scalzi 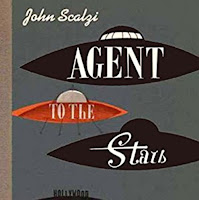 I love science fiction, but most of the good stories seem to have already been told. So on the rare occasions I do find something new and different, I get really excited. When I saw the retro-60s cover of Agent to the Stars and read Wil Wheaton narrated it, I decided to give it a chance. Wil Wheaton tends to narrate a certain type of story, so you have a pretty good idea what you're getting into.

Agent to the Stars is scifi comedy written by John Scalzi. It's available in all formats: eBooks, Audiobooks, and those paper things your grandparents used to read.


Agent to the Stars is the story of a Hollywood agent who represents a handful of movie and TV "stars" without much hope of a big career and one movie star who will have a bright albeit brief career due to her looks. He is assigned to help an alien race make first contact with Earth and somehow make them appear friendly and not start a riot.


Writing. I had never read anything by John Scalzi before I listened to this book, but he is an excellent writer. His tone is very conversational. The prose is clean and crisp and moves at a great pace. The wit and personality of the author comes thru in the words no matter what the situation.

Characters. The characters are all basically caricatures of those who work in film and television, but the author manages to make each one zany enough to be fun and likable, but it does take time for each one to reach that point.

Humor. This book is very funny, but with a more intellectual and understated sense of humor. There were a few scenes where I laughed out loud, but most of the time I just had an amused smile on my face.

Situations and Twists. This book has such outlandish characters and situations that it almost feels like a cartoon, but the author is skillful enough to always keep it in a believable real-world setting. The author never holds back with how far he can push things, but each one serves a purpose and adds something to the story or the characters so nothing feels superfluous.


Overused Stereotypes. The main characters of this book are all involved in the movies or TV somehow and are basically caricatures that have appeared frequently over the last century in movies and TV. The author manages to make each one zany enough to be fun and likable, but it wouldn't of hurt to be a little more original.


The only thing I can think of is having more interesting aliens. As much as I love green Jell-O, I was glad when the story went away from the alien. Some of the cultural criticism it brought up were entertaining, but that was just a small part of the alien's page time.


Agent to the Stars is an entertaining and hilarious scifi comedy. The characters are all a lot of fun with outlandish situations that couldn't happen anywhere else. I was entertained from start to finish. I give it a 5 out of 5 eReaders.