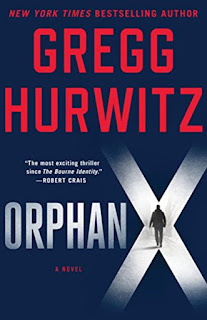 I've enjoyed spy thriller stories and action adventures since I first saw them parodied on Saturday Morning cartoons. I saw my first James Bond flick at a younger age than I probably should have. In the last few years I've become a voracious reader of crime comic books like Criminal, Sin City, and Whiteout: Melt and crime/spy thriller novels such as The Dispatcher, The Wheelman, and Johnathan Quinn. So when I saw Orphan X was on sale and and was narrated by Scott Brick, I got pretty excited expecting to discover another great writer.

Orphan X is an adventure spy thriller written by Gregg Hurwitz. It's available in all formats: eBooks, Audiobooks, and those paper things your grandparents used to read.


Orphan X is the story of an ex-government-trained assassin who left because of moral objections and personal loss. He now spends his time and uses his skills to help those who have no one else to turn to. But the government is not content to just "let him go".


Writing. The writing is good. The author does an excellent job of painting each scene in the readers' minds and making the action come alive. He also spends sufficient time developing each character so the readers understand who they are and what motivates them.

Cover story. This book contains a minor subplot which is basically the protagonist's cover as an ordinary man so his enemies can't find him. The characters and minor conflicts from bullies at school to an assistant DA who is targeted by organized crime to the home owners' association and their bizarre rules are probably the most entertaining and interesting parts of the novel.


Characters. The main characters are well developed, but none of them are interesting. The minor characters who are part of the protagonist's cover are the most compelling, but unfortunately they have little page time. The main character, the villains, the victims, are all shallow and one-dimensional. They look like the author saw a crime triller or read a spy novel and said, "That was cool! I want to write that." And did.

Motivation. The motivation for the characters is pretty prosaic and tired. The main character is pretty bland and generic and sounds like dozens of other action heroes. The victims are all minorities with the stereotypical problems of minorities from domestic disputes to immigration concerns and debt. Not a single one is memorable. The villains are little more than the mustached bad guy of mellow dramas tying someone to the train, only they have much better and cooler tech than a steam-powered locomotive. Again, this feels like a bad remake of shows and books I've seen and read before.

Twist. This novel is supposed to have a twist at the climax, but it's something that a reader with even half a brain saw coming from before the middle of the book. In fact, it's the only answer that actually makes sense, because the author neglected to offer any even semi-likely alternatives.

Surprise Ending. I think the end was meant to be a shocker and a twist with the unexpected reveal, but the character involved wasn't interesting enough for me to care, and having a character fake his death only to reappear happens in almost every spy or crime thriller if it lasts very long.


I wish the author would have done something original and interesting with the main story. He tries to make Orphan X seem all powerful and clever, but nothing he does is different than what every other version of this character does. The story itself is supposed to be intense and filled with intrigue and twists, but instead it's the same ride I've taken many, many times with each twist an expected and overused turn. Which is a shame, because the author is a good writer with talent, just not much imagination or originality.


Orphan X is a competent book that is entertaining but nothing special. This is the first in a series I have no desire to read. One was enough. I don't regret reading it, but I'm not going to waste my time or money reading anymore. I give it a 3.5 out of 5 eReaders.