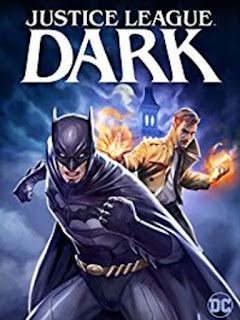 I've been a huge fan of superheroes for as long as I can remember. When I first hear DC planned to produce a series of direct-to-DVD movies adapting popular storylines, I was stoked. Then I saw them. While there have been a few gems such as Justice League: Crisis on Two Earths, Justice League: The New Frontier, Green Lantern: Emerald Knights, Batman: Under the Red Hood, and Superman vs. The Elite, most of them have been very disappointing and hard to sit thru. So when I heard DC planned a film with secondary characters, and supernatural ones at that, I braced myself for the impending train wreck. Fortunately, it never came.

Justice League Dark is a 2016 direct-to-Blu-ray/DVD original animated movie based on the supernatural DC Comics characters John Constantine, Swamp Thing, Deadman, Zatanna, The Demon, and Felix Faust. It's rated R, although I'm not sure why, because it has no more questionable content than any of DC's recent PG-13 movies. There are a few disturbing scenes so only the very youngest viewers shouldn't watch this.


Several average citizens have visions of demons causing them to commit unspeakable acts. The Justice League investigates and realizes the cause is supernatural. Deadman inspires Batman to contact John Constantine, and a group of supernatural heroes is formed to hunt down and stop the menace.


Story. This movie had a solid story that was clear, easy to follow, exciting, and fun. Nothing felt forced or contrived. I was completely entertained from start to finish. Even the twist at the end--which was a pretty standard twist I've seen used hundreds of times--wasn't annoying. It wasn't surprising, but it did make sense to the story and helped tie threads presented earlier together. I was even impressed they let a main character die to add impact to the story instead of presenting a magical fix. And the death just happened, no big hyping to make it "edgy" or any other such nonsense.

Choice of Characters. This movie used some of the lesser known and more obscure characters in DC's pantheon: John Constantine, Swamp Thing, Deadman, Zatanna, The Demon, and Felix Faust. Each one was presented with a back story, motivation, and given something important to do, and yet none of that felt formulaic or forced. It all fit naturally and smoothly into the overall story.

Action. This movie had some of the best action I've seen in an American animated film in a long time. The fight scenes were all big and felt like something was at stake, yet none of them felt too big or over the top. None were over too quickly or dragged on too long. There was a good mix of types of action and fighting as well so it never felt repetitive. All of the action added to the story and was necessary--no gratuitous fight scenes here, folks!

Pacing. This movie starts off with a bang and never lets up. I never found myself bored or checking the time to see if it was almost over. And yet it never feels rushed or like there is too much action. There are plenty of calmer scenes to space out and balance the intense fight scenes--the perfect mix of both.


Character Designs. This film uses the movie version of the New 52 introduced in Justice League: War. I wasn't a fan of it then, and I am not a fan of it now. They are ugly and impractical. They make Superman's red underpants look sleek and fashionable. The New 52 has been over for almost a year. Let the ugly costume designs die with it.

Zatanna. I love the character Zatanna. I wish the director had stuck closer to the comic and previous cartoon versions, because this version is very generic and uninteresting. Her entire characterization is nothing more than a plot device, and not a very interesting one at that. In the comics and shows she is sweet, caring, and clever. They forgot all three of these traits and instead chose to portrait her as a

John Stuart. Green Lantern in the New 52 is Hal Jordan, and he's been used in all previous New 52 films when Green Lantern was needed. I'm not sure why he was on vacation with John Stewart filling in other than provide the usual "token black guy" every superhero project seems to need. And that's all he was. He was completely unnecessary to the movie and added nothing to the story other than the very racist stereotype of "token black guy".


The only suggestions I have are pretty minor. I wish they would have shown Swamp Thing a little more and given him a bit more to do. He is an interesting character and didn't feel as fully used or fully fleshed out as the other characters. I also wish DC had made this PG-13. There really wasn't anything R-rated except for the bodies hanging in the shed, and those were mostly in shadow so you really couldn't see them, just sense them.


After years of disappointing original animated movies, DC finally delivers a thoroughly entertaining and action-packed movie worth 1 hour and 15 minutes of my time. Justice League Dark presented lesser known characters, made them interesting, and made me want more. I give it 4 boxes of popcorn out of 5.