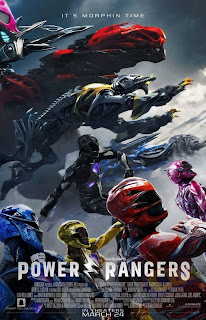 I was a big fan of the original Power Rangers and watched it everyday in reruns along with Batman: The Animated Series on Fox. I enjoyed the first big screen adaption and was curious to see if the producers would take the obvious "dark and edgy and modern" remake route or do something really interesting. (They took the obvious route in case you were wondering.)

Power Rangers is a 2017 action, science fiction, super sentai film based on the 1990s series Mighty Morphin' Power Rangers and Super Sentai, the Japanese drama it was based on. It's rated PG-13 due to language and a few mature elements and is appropriate for tweens and up.


Decent Underlying Story. The story wasn't that bad. There was definitely a more sensible motivation for the villain to attack than she was evil like in the original series, and events did proceed in a somewhat logical fashion with one scene influencing the next.

Some Character Development & Motivation. The characters had a lot more backstory and motivation in this version, and the interaction between them had a little bit of drama.


Weak Storytelling. Everything that happened in this movie always happened at just the right time with just the right people being in just the right places. For a kids movie that's fine, but this film is trying to be more serious and more sophisticated so it doesn't work.

Poor Balance of Adult vs. Juvenile Tone. This story was trying to be more serious than the TV series and even included some harsh language, but then then the motivations and storytelling were very Saturday Morning Cartoony. The producers kept straddling the line between the two, never committing to either and it was a little disjointing. It wasn't serious enough or solid enough for adults, but it was too adult for small children. A lot of shows have had this problem in the past, and it's almost always sunk them.

Action & Fight Scenes. The action and fight scenes in the original series was plentiful, well choreographed, and plain fun. The action in this movie was very sparse, and when there were fight scenes, they were so badly filmed you couldn't really tell what was going on.

Lack of Fun and Color. One of my favorite things about the Power Rangers is the color and sense of fun. Even though the show is as fake as you can get with mediocre acting and thin stories, it's still a good time and a delight to watch. This movie didn't have any of that. It was very grey and monotone.

Rita Repulsa and Goldar. I recognize that Rita and Goldar were very silly in the original and that they needed a reinvention, but this movie turned Goldar into some mindless brute with no personality and Rita into a psycho, and not the interesting Norman Bates kind of psycho. The film versions made the originals look like literary masterpieces.

Art Direction. I recognize that the monsters and sets in the original series were low budget, cheesy, and downright silly, but they were very creative and imaginative. The zords were cheap Japanese robots, but they still managed to look cool. This movie was the opposite with ugly settings, ugly costume designs, ugly zords, and an ugly Megazord.

Messing with the Mythology. I wish the producers hadn't ignored or changed so many of the elements that worked so well with the original series. If the success of the Marvel movies has taught us anything, it is that being true to the source material and what makes it work is a much better strategy than creating a generic action movie and slapping some franchise name on it. This remake is not interesting enough to draw in new fans or spawn a new franchise. The only people who will really be drawn to this are those who grew up with the show and their children who will be forced to relive their parents' nostalgia. So the movie really should have catered to that, and that would have been more successful in drawing in new fans.


I wish the producers had found a director with a clear vision of a cool and unique reinvention for the franchise instead of taking the obvious (and almost never successful) "dark and realistic" route. The original series had a very distinct and addictive style that is still used in the latest incarnation and still attracting new fans. This movie is pretty generic and forgettable, but it didn't need to be.


Power Rangers is exactly the type of remake you would expect in today's world: it's grim, trying to be serious, and tries to more based in reality but sacrifices the fun and unique elements to do it that made the original so memorable and addictive in the first place. Some of the changes in character motivation and backstory had potential, but it wasn't enough to overcome the negatives, and only a few of the changes were really for the better. I give this film a 3 out of 5 boxes of popcorn.