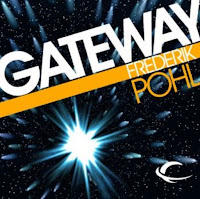 I'm a huge fan of classic science fiction. Two of my favorite old time radio dramas are Dimension X and X-Minus One. Both adapted numerous well-known science fiction stories that still hold up well to this day. That's one reason I was excited to find a Frederik Pohl novel. I was even more excited to find out it had won two prestigious awards, the Hugo and the Nebula. Unfortunately, the story did not deliver.

Gateway is a dystopian future, science fiction novel by Frederik Pohl. It is available in all formats: eBook, Audiobook, and those paper book things your grandparents used to read.


In a dystopian future, humans have discovered a space station with ships left by a past civilization that travel to various unknown (and occasionally known) parts of the universe. Those with few options sign on as crew members to travel to these far off locations in search of something worth a lot of money. More often than not they return having found nothing, or don't return at all.

Psychiatrist Robot. The best part of the story is the psychiatrist robot the protagonist sees every other chapter. He is funny, comes up with great one liners and sayings, and does the most outlandish things to annoy his patient while still helping him. It's the only original and remarkable part of the whole book.

Writing. The writing is pretty good. It's very conversational and enjoyable to listen to. The story is told from a first-person point of view, from a character who is discovering this world along with the reader.

Characters. There aren't that many characters in this book, but most of them are likable and fairly developed even though they're pretty ordinary. None of them stand out and are memorable or unique. They say and do the obvious thing never surprising the reader.

Lack of Adventures and Other Cool Stuff. Most of the story involves people standing around talking to each other. The premise is a fleet of ships that can go anywhere to unexplored corners of the galaxy, but almost nothing is done with that. The author mentions a few flights and interesting finds, but there more in passing with no details about the adventures. It seems a waste.

Purpose & Ending. When I finished the book, my first and only reaction was, "That's it? That's how this ends? Really?" I was hoping for some meaningful resolution to justify this story's existence, but instead the story just ends with a pointless twist that feels more like lazy writing than anything. The fact that the protagonist was seeking counseling suggested something traumatic had happened, but the event was so sudden and shoehorned so quickly in at the end that it felt out of place and gratuitous.


I wish this story had a point. It meanders from one incident to the other and then ends with a dramatic scene that is over too quickly and is out of character for the rest of the book in tone and action. I wish this story had taken more advantage of the premise to visit unexplored corners of the galaxy. I wish the characters weren't so generic and predictable.


Gateway is a considered a scifi classic, but I'm not sure why. It's a competently written book with generally likable but ordinary characters who do and say exactly what you'd expect. The story meanders, but it interesting enough. The ending felt like it was shoehorned into the story. It's a decent book, not a great one. I give it 3.5 out of 5 eReaders.