Book Review - Meet Me in Atlantis: My Quest to Find the 2,000-Year-Old Sunken City by Mark Adams 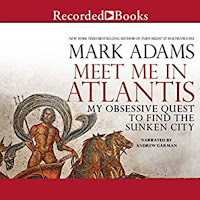 I've been a lover of mythology since I first heard listened to the tales of gods and heroes as a little child. The fact that many of these stories were likely based on real events intrigued my young mind at the time and continues to intrigue my old mind making it wonder what really happened all those thousands of years ago.

Meet Me in Atlantis: My Quest to Find the 2,000-Year-Old Sunken City is a nonfiction adventure / travelogue written by Mark Adams. It's available in all formats: eBooks, Audiobooks, and those paper things your grandparents used to read.


Meet Me in Atlantis: My Quest to Find the 2,000-Year-Old Sunken City is the story of one man's journey to discover the lost city of Atlantis. He begins by summarizing the myth as told by Plato and then travels to several possible locations and explores the pros and cons of each.


Writing. This is really a fun book. The writing sounds like a buddy has just returned from a great adventure, and he is so excited to tell you all about it. It's crisp and clear and never drags or gets bogged down in scholarly prose.

Explanation of the Myth. The author does an excellent job retelling the original tale first told by Plato and then elaborated on by later writers and philosophers. He presents several new interpretations from scholars and experts on ancient ways and how they constructed myths and hid messages using numbers and placement. It was very fascinating and gave whole new meanings to familiar old tales.

Travelogue. I love traveling. I love travelogues. A good travelogue makes you feel like you've truly experienced a distant local, and this book does that marvelously. The author's descriptions are so vivid with concrete, relevant details. Each place he spends an appropriate amount of time painting the milieu, introducing the reader to the people and cultures and history. I feel like I've been to Morocco and Crete and locations in between.


Purpose/Point. The title of this book is "quest" which naturally leads the reader to suppose that at the end of the journey he will discover something wonderful. There's nothing wonderful at the end of this book. It just ends. We're no closer to finding Atlantis than when the author started. I was pretty sure the author wouldn't be walking the streets of the ancient city situated beneath a dome at the bottom of the ocean or in another dimension, but I had hoped at least something would have been accomplished by the end.

Guides along the road. At each stop the author meets with an "expert" who believes his or her location is the site of Atlantis. The idea of such a guide is great, but I question his choice. They aren't the most interesting of souls and are pretty blind to contrary evidence.


As much as I enjoyed the journey--and many people will tell you that the journey is more important than the destination--I still like a meaningful destination, and this book really didn't have one. We're no closer to finding Atlantas or even knowing if it ever really existed than we were before the author took his journey. I wish he had added something to the search.


Meet Me in Atlantis is an incredibly enjoyable ride with stops in several interesting and exotic locals and a fascinating look at history and possible history I'd never heard of before. Though nothing is really accomplished or discovered by the end of the book, the journey itself is enchanting enough to make the trip worthwhile. I give it a solid 4.5 out of 5 eReaders.