Book Review - The View from the Cheap Seats: Selected Nonfiction by Neil Gaiman 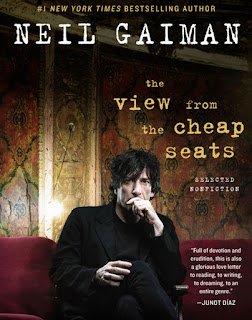 Neil Gaiman is one of the most popular writers currently living with title covering a wide variety of genres in fiction. Strangely, I've never been a fan of his fiction--in fact, I've strongly disliked everything I've read by him--but his non-fiction I can't get enough of. It's brilliant and addictive. I'm not sure why his fiction doesn't do for me.

The View from the Cheap Seats is a collection of essays, speeches, introduction, and other non-fiction writings by Neil Gaiman. It is available in all formats: eBook, Audiobook, and those paper book things your grandparents used to read.

The Viewpoint. I really enjoy Neil Gaiman's viewpoints and perspectives on various topics. His views almost always seem to be thought out and has some reason, experience, or other substance behind why he thinks why he does, and he shares that with you. It's obvious he has very liberal leanings, but unlike most people with strong political leanings, he isn't heavy handed about his approach nor does he try to stuff his views down your throat. Many essays and writings are really about multiple viewpoints and expressing those. It's refreshing in today's heavy-handed, "you-must-believe-what-I-do" world of intolerance.

Variety. There are a wide variety of different types of writings from very brief introductions to very long essay-length stories. He covers all sorts of topics from comic books to writers to artists to movements to the publishing industry to awards to music to celebrities and many topics in between.

A Look Behind the Curtain. This book very much feels like the special features on a Blu-ray or DVD. A lot of these writings are how something was done or the story behind a story, which I find very fascinating, and considering how many people buy physical discs for the special features, I'm not alone.

Narration. Neil Gaiman himself reads this title, and I think it really ads to have the author actually speak his own words, especially when it's really his own thoughts and views.

Repetition. Because this is a collection of various types of writings at various times for various publications and occasions, he tends to repeat himself a lot. If you were to hear him deliver the lecture live or read the introduction in a book, you probably wouldn't notice, because you probably hadn't read the other introductions or speeches he had written or given. But having them collected here all together and grouped into categories of similar genre, the repetition sticks out and gets a little tiring after awhile. I don't fault the author--that's the nature of the beast--but it is something that does distract from the enjoyment of each work.


I wish there were a little less repetition and instead included a few more topics and ideas. I also think this could have been trimmed down a little. It felt long, and the repetition of ideas only made it worse.


The View from the Cheap Seats is not the kind of book that will appeal to everyone, but for someone who likes to peek behind the curtain and see how things are done, it's fascinating. Neil Gaiman has a unique perspective on a myriad of topics, and most are fairly well thought out. I give it 4 out of 5 eReaders.