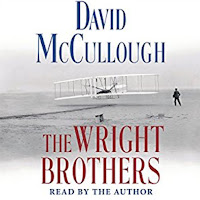 I had heard a lot about David McCullough, and had even purchased one of his books for my brother, but I had never read anything by him myself when Audible listed The Wright Brothers for preorder. I had a few dollars in credit to spend, and for whatever reason I clicked on preorder without thinking. I never preorder audiobooks. I also never order books I've never previewed or read reviews for unless it is by an author I love. In fourth grade I had read a biography about the Wright Brothers and figured I knew everything there was to know (because books for fourth graders are so complete and go so in depth). But something drew me to this title.

The Wright Brothers is a biography written by David McCullough covering the life of Wilbur and Orville Wright, their early life, the lives of their immediate family members, their venture into the bicycle business, and their work on inventing the first airplane and bringing it to market. It covers their personal lives as much as their public contributions. It's available in all formats: eBook, Audiobook, and those old-fashioned paper book things.


The History. The thing that surprised me most about the Wright Brothers is how normal and average they were. They seemed like normal people that might be living next door. I was also surprised that they didn't have some great stroke of genius or luck leading to their great invention. It was a lot of hard work, trial and error, and perseverance. Nothing happened to them that couldn't or hasn't happened to anyone else--they just happened to work on a project that had far reaching impacts. And it was that ordinariness, that common experience, that really drew me in.

The Storytelling. The Wright Brothers' invention was monumental to the development of so much in the Twentieth Century, and yet the Wright Brothers' story itself was pretty commonplace and similar to the stories of a thousand people both successful and unsuccessful. And yet somehow David McCullough made it sound like the most intriguing story of the last century. Every event he chose to include, every time he paused to add description or other details, held my attention. I never found myself bored or feeling like the story dragged. And yet there was nothing dishonest, hyperbolic, or overdramatic in his telling. It was very straightforward.

Complete. When I read John Adams by the same author, I was disappointed how little was included outside of Adams' political life and events that directly tied to the destiny of the United States. I wanted to find out more about the man and his family. The Wright Brothers does not suffer from the same shortcomings. I felt I understood the brothers as people just as much as political figures. I also felt I knew the town they came from and the family and friends that were important parts of their lives. I felt this biography was complete with every germane fact included. I wasn't left with any questions or wondering about something that wasn't covered. I really appreciate that.


The only thing bad I can say about this book is it was so good and so interesting, everything I've read by David McCullough since has been disappointing in comparison. I shouldn't have started with the best, because there's only one way to go when you're on top.


The Wright Brothers was such a well-written and engaging story, I couldn't put it down. Even though the events weren't the most momentous or exciting in history, somehow David McCullough brought them alive in a way that was as entertaining as it was informative. I appreciate how equal attention was paid to their personal lives as their public contribution with an objective eye. I highly recommend it for all readers and give it a solid 5 out of 5 eReaders.