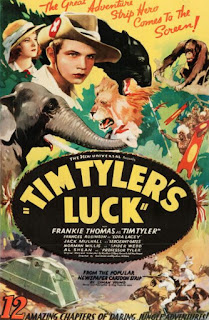 I love old Saturday matinee movie serials from the 30s and 40s. They were fun, exciting, and escapists in the best sense of the word. Each week the movie viewer could find himself swept off to exotic locals both real and imagined. And it was the first time most fictional characters from comic strips, comic books, and radio dramas were portrayed in live action, something that makes every fan giddy. They were low budget and most followed a very similar formula, but still they contained that element of fun which makes them classic and enjoyable to watch today.

Tim Tyler's Luck is a 12-chapter action, adventure movie serial from 1937 based on the comic strip Tim Tyler's Luck created by Lyman Young that ran from 1928 to 1996. It's appropriate for all audiences.

Tim Tyler is a young boy whose father is an expert in gorillas and has gone off to Africa to study them. Tim becomes worried about him after receiving a letter and sneaks aboard a ship traveling to Africa. On the ship he encounters a young woman hunting a dangerous criminal, Spider Webb, who can help free her brother currently serving time in jail for a crime Spider committed. The action continues to Africa and the search for the legendary elephant graveyard.


Story. Most movie serials introduce a MacGuffin during the first chapter (a new scientific invention, archeological discovery, or some other thing) and the remaining chapters are spent trying to obtain the device. Often it's divided into parts and each chapter is devoted to the search for one of those parts. They're written very episodically with it possible to watch the first and last chapter and miss very little of importance in between with each chapter serving as a mini story that is exciting on its own but adds little to the overall story beyond obtaining one more piece of the MacGuffin. Tim Tyler's Luck broke from this tradition by presenting one long story broken into chapters like a novel. Each chapter was essential to the overall story and moved the plot forward presenting significant events. There were almost no gratuitous action scenes or side stories. Everything that happened directly and significantly contributed to the resolution. This was really, really strong storytelling.

Visuals. This serial takes place in the jungles of Africa and on a riverboat. We see lots of exotic animals from lions to monkeys to gorillas to crocodiles to elephants. We see great jungle scenery, the Ivory Patrols fort, the swamp base of the bad guys, nicely designed caves, and beautiful costuming. It was a visual feast.

Stunt Work and Action. This was made in the 1930s before special effects were very advanced, which means all the action is practical and real. While not as big and explosive as today's blockbuster action scenes overflowing with the wirework and cgi, there is something more exciting about knowing a real person is jumping into real water, swinging on a real rope or vine, or riding thru a real jungle. It actually looks better than a computer generated fantasy and is more far more exciting and satisfying. Visual production may have improved over the years, but quality of stuntmen was high even back then, and this serial used some good ones.

Fun. Movie serials are just plan fun. They were made with a single intent: to entertain and help the viewer escape, and they do this beautifully, even the bad ones. The strong story and beautiful visuals only added to an already good time.

Cliffhangers that didn't cheat. Saturday matinee movie serials are famous for their cliffhanger endings. At the end of each chapter the hero is placed in a life or death peril they can't possible escape from forcing the viewer to return the next Saturday to see if the hero can possible survive. Often the footage at the end of one chapter is different from the beginning of the next chapter showing some additional scene where the hero sneaks thru a secret door and hides in a closet or box to escape the explosion or fire or jumps out of the car just before it goes over the cliff, something that clearly was impossible the week before. Because the chapters were shown a week apart, the filmmakers may have been able to get away with such cheats, but watching the chapters altogether makes such sloppy filmmaking unforgivable. Tim Tyler's Luck did not have one single cheat, something I can't recall seeing in any other movie serial. This also meant that the perils weren't as great, but I'm okay with that. It adds believability to an otherwise fantastic story.


Acting. Rarely do you see major actors appear in movie serials. Their low budgets usually meant they used second- and third-tier actors. This serial is no exception. Most of the lines are recited while characters stand stiffly. There is about as much acting here as a grade school play.

Transfer Quality. The transfer was very poor with a fuzzy picture and poor audio. It looked like they tried to digitally remaster a public domain copy. Several times I really wasn't sure what was being said. And maybe a quality print doesn't exist and this is the best we have. Movie serials were created as disposable entertainment.


I wish a good print or even the original negatives had existed so a better print could have be produced. The fuzzy picture and hard-to-understand audio really detracted from an otherwise great experience.


Tim Tyler's Luck is one of the most enjoyable movie serials I've ever watched. It featured beautiful visuals and had the strongest story I've ever seen in a movie serial with a lot of variety in action and locations. I watched all 4+ hours in one sitting. I give it a solid 4.5 out of 5 boxes of popcorn.