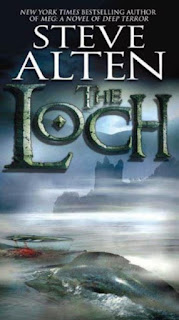 I love mysteries, but it's hard to find one that is exciting, suspenseful, keeps you guessing until the end without cheating, and has likable characters who are as interesting as the mystery. I was lucky enough to find one such book.

The Loch by Steve Alten is a suspense, mystery, monster hunt story. It is available as an eBook, Audiobook, and one of those paper things your grandparents used to read.


Characters. The characters are fun and interesting. Even without the mystery, their story is worth the read.

Unique Take On Nessy. I'm a Loch Ness Monster fan, but most of the stories tend to be very similar. This book offered a very different take with what the beast was, how it related to nature, and why it was in the Loch. Tying it into ancient knights templar was a nice direction to go.

Mystery. This book contains several mysteries that tie together nicely and are each interesting to explore.


Pacing. The book moves at a pretty good pace, but it does drag in areas.

Reveal. The mystery and solution are really good, but the author takes so long getting to them and gives the reader so many clues and repeats those clues so many times that by the time you get to the reveal, the reader has long since figured it out.


I wish the main character hadn't been so clueless and the author hadn't had to spell out the clues to often and so clearly. It would have made for a better reveal.


The Loch by Steve Alten is a suspenseful tale of several interrelated mysteries that keep you guessing almost to the end without cheating AND has likable characters who are as interesting as the mystery.  It's unfortunate the author has so little faith in the reader that he has to spell out the clues and review them often making the solution easy to guess before the final reveal. I give this book a solid 4.5 out of 5 eReaders.