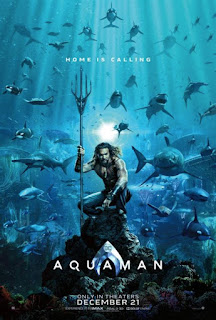 I'm not a huge fan of Aquaman, nor did I enjoy him in Justice League. But the

Aquaman is a 2018 superhero action film based on the comic by DC Comics. It is rated PG-13 for mild violence and is appropriate for most ages.

Action. There was a lot of great action. This is an action movie first and foremost. It looked better rendered than a video game, but the movements were very video game-like.

Music. Both the soundtrack and the songs were really nice and different than what you normally hear in any film, especially superhero films.

Black Manta is Evil. I like the fact that Black Manta was not misunderstood, not a tragic figure, not a cartoon villain, but an evil bad guy who does things because he is bad and his wickedness punishes him.


Story. The story was pretty thin. It was your typical action film with "twists" that weren't surprising and over the top dramatic reveals.

Black Manta is a Thug. Black Manta was basically an unlikeable thug. Where they've set him up to be in the next film, they needed to make him more interesting.


I wish this film had had a stronger story.


Aquaman is an entertaining action flick. It have beautiful settings and amazing costumes. The story is thin, predictable, and mostly an excuse for all the many action scenes. The music was very different than you're used to hearing in films today, but very good. I give this film 3.5 out of 5 boxes of popcorn.