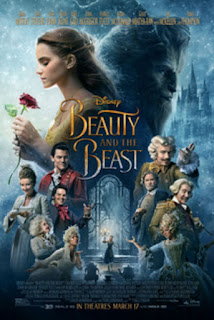 I remember going to the theater to watch Disney's animated version of Beauty and the Beast. I had loved The Little Mermaid, so I was really excited to see what they would do with this fairy tale. I was familiar with the story, because when I was little I watched an animated version of both The Little Mermaid and Beauty and the Beast on television. (I think they were both Japanese cartoons from the 70s, but I'm not sure, because I've never been able to find either of them. If you are familiar with either, send me a message with more information.) I was completely enchanted and wondered if that film might just be better than Snow White and the Seven Dwarfs. (It's not, but it come close.)

Disney's Beauty and the Beast is a 2017 live action adaption of the 1991 animated fairy tale. It's rated PG for a few frightening scenes but is appropriate for most audiences.


A young man is cursed for his cruelty to an enchantress in disguise. The entire castle is cursed. He must learn to love and find someone to love him to break the spell. In a nearby village, a young woman finds herself not fitting in and longs for something more. You'll never guess what happens next.


If It Ain't Broke. My biggest problems with the previous Disney live action adaptions (Maleficent, Cinderella, and The Jungle Book) is the omission of the music. The music is a key element to any Disney film and a large reason why the feature either succeeds or doesn't. All of the beloved songs from the 1991 animated version are here.

Changes. There is a video online called Everything Wrong With Beauty and the Beast (1991). The producers must have watched that video, because all of those problems were fixed. The set up, the backstory, the motivations, the development of the relationships all varied from the original and for the better. This version makes much more sense, answers a lot of questions, and fills in a lot of plot holes and inconsistencies.

Singing. I thought the music in the original was perfect. I was really scared about how it would be performed in this version. The previews and trailers hardly showed it, which made me even more nervous. (Look at the mess called Les Miserables and the poor casting choices butchering the songs.) But my fears were for naught. Every performance was excellent, different from the animated version, but still wonderful.

Casting. I admit, I raised more than one eyebrow at the casting choices, but everyone gave a great performance. I don't know that the filmmakers could have done a better job.


Lack of Color. One of the many things I loved about the 1991 animated version was the beauty of the animation and backgrounds. They had such gorgeous color. And I've been to palaces in France, and they do have gorgeous color. Unfortunately, this movie chose to portray everything in very muted blue tones and dull gold tones.

Drags 2/3 of the way in. This version spends a little more time on relationships, motivations, and backstory. This helps to flesh out the story and solve many of the plot holes and other problems with the story of the animated version, but also slows the pacing down to the point I started glancing at my watch.


I wish the movie had been brighter and more colorful. Otherwise I wouldn't change a thing.


Disney's Beauty and the Beast is a masterpiece. It follows the animated version very closely, but makes important changes and additions to fix the story problems of the original and provide more believable motivation and backstory. The beloved songs are all here with three additional songs that, while not instant classics, are very enjoyable and add to the story. I give this film a solid 4.5 out of 5 boxes of popcorn.