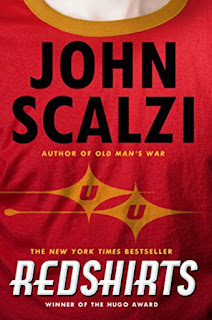 I've enjoyed a lot of books by John Scalzi, I love Star Trek, and I enjoy Wil Wheton's narration. But I don't like bad parodies or silly science fiction which this book seemed like it was. I downloaded the first four chapters as a free preview, but couldn't get thru them. It took me awhile to finally break down and buy the book, and it was mostly a leap of faith based on how much I enjoyed previous books by this author.

Redshirts is science fiction comedy written by John Scalzi. It's available in all formats: eBooks, Audiobooks, and those paper things your grandparents used to read.


This story is a very clever parody of Star Trek with the crew realizing they are controlled by a TV show and have to figure out how to break its hold or end up dying at the whims of the producers and writers.


Writing. Most stories by John Scalzi I've enjoyed. He always has a very original take on traditional stories. The prose is clean and crisp and moves at a great pace. The wit and personality of the author comes thru in the words no matter what the situation or genre be it space opera or crime thriller.

Characters. The main characters are basically extras from a bad scifi TV show, but the author has managed to give each one a personality and made me care about the fate of each one.

Pace. This book starts off a little slow, but after the first four chapters it moves quickly and never feels stagnant or rushed.

Humor. This book is very funny, but with a more intellectual and understated sense of humor. There were a few scenes where I laughed out loud, but most of the time I just had an amused smile on my face.

Relationships. John Scalzi's other books have great characters, but this is the first one I've read that had great relationships. He really spent time on the interactions between characters and developing the characters thru their relationships with each other. The many sentimental moments really heightened the overall impact of the story and added real weight to the main conflict. The relationships are why I cared whether the characters succeeded in their big mission or not.

Twists. This book definitely has some twists I didn't see coming, but none of them felt contrived or forced. The situation was so well set up that everything felt like it had to happen. And the twist at the very end (Chapter 24)  was quick but laugh out loud hilarious and so brave to pull off.


Bad Star Trek Parody. The novel opens up with a bad parody of a mediocre episode of the original Star Trek. I understand that this is necessary to set up the story and the world, but it could have been more interesting. Also, Star Trek always took itself seriously and tried to be high literature, with the silliness being a result of small budgets, short shooting schedules, and the 1960s. It kind of annoys me when people exaggerate the silliness.


The only thing I would change is to have a more interesting opening. The first few chapters are generic, bad science fiction and were hard to sit thru. I almost didn't buy this book after previewing the first two chapters they were so lame.


Redshirts is a hilariously entertaining science fiction comedy with a really unique twist on the old trope of breaking the fourth wall. After a slow start, it races to an exciting and unexpected finish. I give it a solid 4.5 out of 5 eReaders.