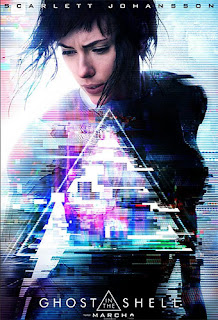 I've read a few manga and watched quite a bit of anime, but I've never read nor watched Ghost in the Shell. I'm aware it exists, but other than that I couldn't tell you much about it. So I went in with few expectations.

Ghost in the Shell is a 2017 trippy science fiction live action film based on the Japanese manga and anime adaption of the same name. It's rated PG-13 due to violence and appropriate for teens and up.


In the future, cybernetic enhancements to humans are all the rage. One company finally succeeds in transplanting a human brain into an android body. She joins a law enforcement group who investigates the murder of several people from a major corporation and attempts to hunt down the perpetrator and discover why he's targeting them.


Solid Science Fiction Flick. This is a solid story told in a fairly standard way. The characters are about as well developed as a typical, non-Star Trek scifi show. There is a mystery that is solved one clue at a time with action and a couple of twists thrown in at the appropriate times. If you like shows on SyFy channel, you'll probably love this.

Straightforward Story. Sometimes movies try really hard to be "visionary" or "revolutionary" by presenting the story in a very convoluted manner. The producers don't waste their time with that. This story is told in a very linear, straightforward fashion.

Didn't Overexplain World. One of the most common aspects of science fiction to get mocked is the author or director's need to explain the world to the reader or viewer as if it were a travelogue and to label things with overly descriptive names. Ghost in the Shell doesn't fall into this trap. Things happened, and the viewer is expected to be smart enough to figure out what's going on.


Indifferent Characters. The characters were fine and had some development, and the casting choices were fitting, but none of them were very likable, compelling, or even hateable. They were little more than useful plot devices.

Lack of Originality. Something that really caught Western audiences' attentions when manga and anime hit the US during the Japanamation era was how different it was from American comics and animation. The style was unique, the subject matter contained so much never even touched on in Western comics or animation, and the way the stories were told was so fresh and different. Unfortunately, every time someone tries to adapt and anime or manga property into live action film, they follow the typical Hollywood formula instead of trying something completely new and original. (Scott Pilgrim vs. The World and 300 are two exceptions, and both were masterpieces.)

Visual Look. The visual look of this film is like every other space opera or dystopian future show currently on SyFy. It doesn't stand out or inspire.


I wish the filmmakers had realized that Ghost in the Shell was such a beloved cult classic because of how unique it was and looked when it came out and tried to create a movie just as unique in terms of storytelling and cinematography. This movie is shot like any other Hollywood film with a visual look and feel straight off the SyFy channel. There are definitely fans of that kind of film, but not in the kind of numbers needed to make this profitable and inspire a sequel.


Ghost in the Shell is a solid science fiction flick that looks like most of the current series on SyFy channel. It's entertaining, but nothing special. The characters aren't especially likable, the design and look of the film are pretty typical, and it wouldn't hurt my feelings to never see a sequel made. I give this film 3.5 out of 5 boxes of popcorn.