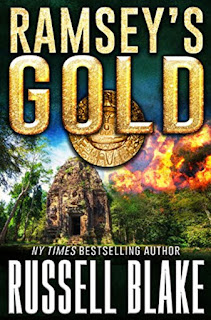 I'm a fan of jungle adventures like Indiana Jones, The Phantom, Tim Tyler's Luck, or DuckTales. And

Ramsey's Gold is a jungle treasure hunt adventure written by Russell Blake. It's available in all formats: eBooks, Audiobooks, and those paper things your grandparents used to read.


After receiving a strange inheritance of money and his father's journal from his aunt, Drake Ramsey decides to continue his father's quest for a lost Inca city and the gold it is reported to contain. On the way he meets up with an old friend of his father, a potential love interest, and a hardened adventurer who may or may not be on his side. And the Russians, a mysterious radioactive ore, and the CIA are thrown in for good measure.


Realistic Take on the Jungle Adventure. Most stories in this genre ignore the realities of traveling thru a remote jungle: the heat, the dangerous animals, the complete distancing from society, the fatigue, the dirt, etc. This book actually addressed those and made them an important feature of the story. That was a nice change.

Competent Writing and Story. The writing was very competent with a fairly solid story and storytelling.

Ray Porter. Ray Porter is one of my favorite voice talents. I will buy a book I know nothing about (like this one) just because he read it. He did a great job making each character feel and sound unique and told the story without ever getting in the way of it.


Typical Troupes. The story is exactly what one would expect. The characters are your typical characters with typical motivations. The twists were pretty usual twists. The happy ending with a few "devastating" losses was exactly what I was expecting from the get go. Everything turned out exactly how I expected it to. The "shocking" revelations I've heard numerous times before. There really is no reason for this book to exist, because everything in it has been done before. This really felt like a textbook example of what this type of story should be bringing almost nothing new or original to the table. For a lot of people that might be a good thing, but I was a little disappointed. I have no desire to read the next two books in the series.


I wish there had been something unique about this book that made it stand out from the rest and made me excited to read the next book in the series.


Ramsey's Gold is an entertaining book that is competently written. It is a fairly standard adventure with all the twists, turns, surprises, and happy ending you'd expect. While it brings nothing new or unique to the table, those who just want to read another well-written jungle adventure like every other well-written jungle adventure will be very satisfied. I give it 4 out of 5 eReaders.