Book Review: We Are Legion (We Are Bob): Bobiverse, Book 1 by Dennis E. Taylor 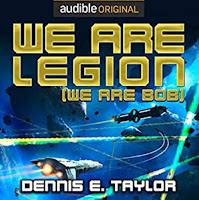 One of the greatest things about science fiction is the ability to ask "what if" and then explore that question. While almost no one can actually see the future or accurately predict much of what will happen, it is still an interesting exercise that can change one's thinking and way of doing things.

We Are Legion (We Are Bob): Bobiverse, Book 1 is science fiction adventure written by Dennis E. Taylor. It's available in all formats: eBooks, Audiobooks, and those paper things your grandparents used to read.


Bob has recently sold his software company and is looking forward to his future when he is killed. Fortunately, he had signed up to have his head preserved thru cryogenics just before the accident (what a coincidence) so he wakes up centuries in the future and learns he will be the "brains" of a Von Neumann probe on a mission to explore the universe and find new inhabitable worlds. Other countries have their own probes ready to launch and the Earth faces the threat of a catastrophic war, so it is a race against time.


Characterizations. There aren't a lot of characters in this book, but the few there are all have unique personalities. I was especially impressed with how the author was able to differentiate the different Bobs who should all be identical but give them slight personality tweaks that made them each seem unique while still retaining essential parts of the original Bob. It was fine line to maneuver, but maneuver it the author did and did well.

Biases kept in check. Everyone has their biases. Everyone has their opinions. Some are better at keeping those opinions from unduly coloring their views of the world than others. The author did a good job of not forcing his political leanings or agenda down the readers' throats. The predictions he made and the reactions of the different parties in the story were all fairly logical and likely given the circumstances. No one group or philosophy seemed to be given undue praise or criticism.

Ray Porter. Ray Porter may just well be the greatest reader ever. He is able to convey so much emotion without every going overboard or sounding over dramatic. He also reads so well that you feel like he is talking to you and not reading to you. The man can do no wrong.


Pace. The novel moves at a pretty decent pace most of the time, but there are times it drags, especially towards the beginning when the reader is still trying to figure out where this book is going.

Predictions. Most of this story takes place in the future, which requires quite a bit of speculating and predicting. The predictions the author makes are certainly possible, but seem fairly generic and unlikely given the course humanity has taken over the last six thousand years. It's a shame he didn't spend a little more time thinking about the future and coming up with something a bit more likely and original.

Geek References. I have to wonder if the author is actually a science fiction fan or a pop culture fan. The main characters constantly make references to scifi and geek culture (Star Trek, Star Wars, etc.) throughout the story, but the references are always the most well known ones. A true geek would have thrown in a few obscure references, because he couldn't have helped himself. There weren't any here.


The predictions and "world of the future" the author creates is a pretty typical, common dystopia that most likely will never happen. It would be nice if the predictions had been a little more original or a little more based in facts and historic trends instead of generic, fear-mongering predictions that never seem to pan out. I also wish the scifi/pop culture references hadn't been so vanilla. This book just wasn't as creative and original as it could have and should have been. It was very predictable.


We Are Legion (We Are Bob): Bobiverse, Book 1 is an entertaining science fiction adventure about mankind's future and exploration of the galaxy using human minds transferred into computers aboard Von Neumann probes and lots of geek references. The overall plot was pretty predictable with no real surprises, but the Bobs (the main characters) were enjoyable and their development was really the focus of the story. I give it a solid 4.5 out of 5 eReaders.