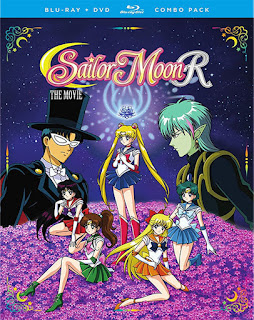 I started watching Sailor Moon back in its first visit to America during Cartoon Network's Toonami, and I absolutely loved it. It was so fun and so fresh and so different than the standard American animation, but not so different that it felt strange or alienating. I remember watching all the movies during their respective Friday night debuts and loving them. I always meant to buy them on DVD, but didn't snap them up quickly enough. Thankfully, they're back with an even better transfer.

Sailor Moon R The Movie is an animated Japanese anime that has recently been re-released in the United States on Blu-ray and DVD by Viz Media. It was originally released in 1993 as Sailor Moon's first theatrical film in Japan and Sailor Moon R: The Promise of the Rose in America in 2000. Included is the original Japanese track and a new English dub. It is rated TV-14 and is appropriate for tweens and up.


A friend from Tuxedo Mask's past returns with a flower as promised, only that flower is evil and wants to destroy the Earth. The Sailor Scouts (or Sailor Guardians in this dub) must use their powers to save all mankind.


Exploration of Loneliness. This film is light on plot. The point of the story is really to explore loneliness and friendship, and the filmmakers do that well. But don't worry, there are some pretty cool fight scenes thrown in to break up the drama.

The Action and Fight Scenes. The action and fight scenes are great with everyone contributing a small part and using several other their powers. There is real struggle and the feeling of actual peril even though you know the good guys will win in the end.

Visuals and Audio. This video transfer is beautiful. The picture is crisp and clear with bright colors. And while I miss the original voice actors, the audio sounds great with an excellent new dub.


Thin Plot. This movie is very short and has a pretty simple plot that consists of about four scenes. Each scene is interesting, but little happens beyond a lot of talking and flashbacks and people exploring their feelings of loneliness.


I wish this had been longer and had more story. It almost feels more like an incident or nice side anecdote than a full-fledged theatrical film.


Sailor Moon R The Movie is a fun superheroine anime. This film is light on plot as the point of the story is to explore loneliness and friendship, but don't worry, there are some pretty cool fight scenes thrown in to break up the drama. I give it 4 out of 5 boxes of popcorn.