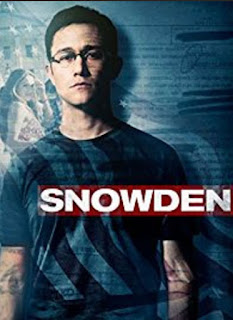 I remember when the story of Edward Snowden broke, I wasn't at all surprised. I guess I'm just cynical, but I assumed the government had been illegally spying on everyone and collecting information they had no right to possess for decades. What I was surprised at was how callous and flippant the government was in its response. There was no embarrassment or attempt to conceal what they were doing. They just smiled, said it was for everyone's good, and kept doing it.

Snowden is a 2016 historical thriller drama based on actual events. It's rated R for some harsh language and brief nudity and is appropriate for teenagers and up.


This film tells the story of Edward Snowden, an employee/consultant for the CIA and other US intelligence agencies, who discovered the US was spying on its citizens and the citizens of other countries without following legal search procedures and exposed it resulting in his exile to Russia.


Acting/Casting. This movie was really well cast with each actor and actress doing an excellent job of creating memorable characters that I found myself caring about either positively or negatively.

Storytelling. This movie presents its message very clearly in a very linear fashion. It begins with Snowden's loyalty and love of country and desire to serve and shows that love challenged by revelation after revelation. The explanations to cover up the apparent problems are clearly laid out and then clearly shown to be lies. The viewer understands what is going on in Snowden's mind and all the conflicts he is dealing with.

Not Heavy Handed. This subject would be very easy to take a heavy-handed approach with, but I didn't feel it was so biased it hurt the film. The filmakers' personal view that the military industrial complex and greed are the root of the corruption is very clear,  but I didn't feel they hit me over the head with it. They also didn't blame a single political party, but showed both parties were involved and guilty.


I wish I knew how much of this was actually true and how much was exaggerated or even invented.


Snowden is a well-told dramatization of actual events that affect everyone on this planet. The writing, acting, and storytelling were all excellent expressing a very clear message. While the story did drag in spots and the movie felt like it was over two hours long, I still give this film a solid 4.5 out of 5 boxes of popcorn.